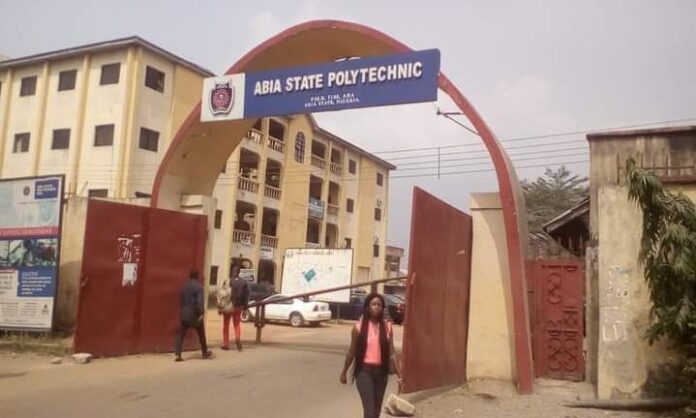 God in His wisdom commanded us that a worker deserves his wages. This ‘commandment’ in its purest form is not entirely inviolable given the existence of certain extraneous factors. I do know that under certain circumstances, like when a Polytechnic that once had an overall student population of 30,000 crashes to less than 5,000, obviously uncommon things must happen. This is not the reason for this piece. I am concerned about the route some Staff Union executives in Abia State Polytechnic, Aba have vowed to take in response to an impending reform of the institution being proposed by the Management.

For those who do not have background information about the Abia Poly impasse, it is important to recall that the institution sometime in 2011 proposed the transition from the CONTISS salary scale to CONTEDISS giving their rising profile at the time. The implication is that the institution’s wage bill moved from less than N60m/month to the current astronomical figure averaging around N175m/month as at August 2019. In between these years, the Polytechnic, for diverse reasons found it very difficult to meet with their salary obligations to workers. Perhaps, they did not consider the possibility of a decline in their fortunes or the likelihood that they had chosen a path neither luck nor time would permit them to sustain. As at 2015, a newly elected Governor Okezie Victor Ikpeazu Ph.D had obliged the institution a whopping sum of N2b which amount they said would help them offset a loan and get back to their feet.

With government subventions and their now meager earnings averaging to a terrible deficit, the idea of looking inwards as a way of addressing these challenges was birthed. If Abia Poly will be rescued from the shackles of distress, things must be done differently. I am aware that while these issues lingered, the various Unions in the Polytechnic did not proffer solutions on how to resolve the impasse. We did not read anywhere that they accepted to make any form of sacrifice in order to mitigate hardship caused by non – payment of salaries. The first attempt by the Management to address these challenges was a proposal for the disengagement of no fewer than 600 staff of the institution. The Ikpeazu administration rejected the proposal and asked that they review same to reduce crises such action may bring.

While these lingered, some sets of civil servants in Imo were receiving less than 60% of their monthly salary. About the same time, a federal institution as Michael Okpara University of Agriculture Umudike, paid their staff about 60% all in a bid to tackle paucity of funds. In Abia Poly, their Union leaders ensured that in the last three years, and at the peak of admission process, they called out their members on strike action. The timing of that action meant Abia Poly lost bulk of their intending students to neighboring Universities and Colleges.

The same Unions, who are by every meaning of the word should be partners in reform agenda of their Management, nay Government have issued a fresh threat of strike that would apparently undermine the ongoing admission process in the institution. Already, the enrollment in Abia Poly has taken a devastating nose dive crashing to an all time low of 2,000.

If an institution owes 15months arrears of salary, does that not show that whatever thing it had been doing is not working? Will it be reasonable in the circumstance for a Union to demand offsetting of these salaries in a one off arrangment? I thought the Unions would have demanded that Management meets with the standard practice disengagement procedure in terms of pay off? If Abia Poly had funds to pay 15months arrears, would it have taken the voyage of laying off 258 of the over 1300 staff of the Polytechnic? By the way, those who are affected know that no decision would have been better than that. If the Polytechnic has mustered sufficient will to start the process of addressing its many challenges, particularly non – payment of salaries, is it reasonable to truncate it?

May be, the Polytechnic should show the world some unspeakable reasons why some of them have to be disengaged in this reform process. That way, Abians and indeed Nigerians will then begin to appreciate that for several years, some persons; including some of those who are championing this unjust fight have benefited from an illegality.

Let the process of recovering Abia Poly that was once prided as the best in South East Nigeria commence unobstructed. Let Abians demand that as it is universally accepted, let severance packages be paid to any staff caught in this reform. Realistically, demanding offsetting 15months is not only impracticable but insensitive t this time. The Polytechnic had said and that appears incontrovertible, that the criteria adopted in disengaging them are in line with best labour practices; take your severance now while you receive arrears of salaries when funds improve. We will not allow those who held the Polytechnic down to continue to do so. Strike is not a tool of vendetta but a valid last resort in the process of labour relations and negotiations. May Abia Poly heal after the surgery.