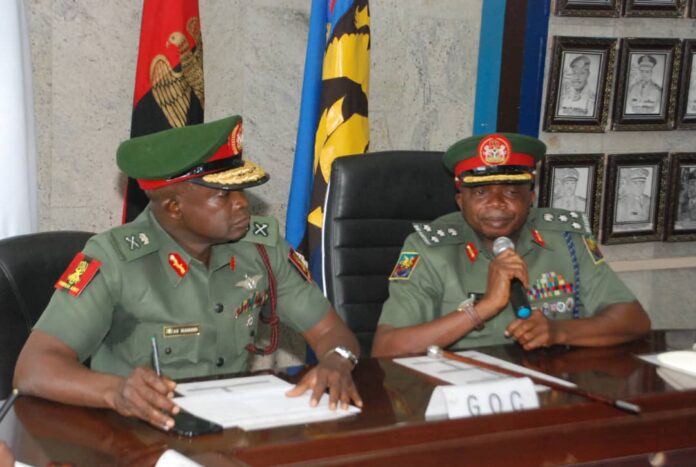 ENUGU— Brigadier General Lasisi Adegboye has officially assumed duty as the new Acting General Officer Commanding (GOC) 82 Division of the Nigerian Army, with a promise to sustain and work towards improving the legacies achieved by his predecessor.

He congratulated the outgoing GOC 82 Division, Major General Abubakar Sadiq Maikobi for a successful tour of duty as well as officers and men of the Division for the support accorded to his predecessor, adding that he was not surprised by the achievements of the outgoing GOC having known his track records as well as the standard of discipline required of officers and men of the 82 Division.

The new Acting GOC charged officers and soldiers of the Division to be steadfast in their duties, soliciting the cooperation of commanders and directors in the Division to ensure the realisation of the Chief of Army Staff’s vision of discipline, transformation and professionalism in the Nigerian Army.

In his farewell remarks, Maj.-Gen Maikobi recounted the achievements of the 82 Division during the period he served as GOC, especially in the area of improved security situation within the Division’s area of responsibility.

Maikobi said the South-East geopolitical zone had remained the most peaceful zone within the country, adding that “we have every reason to thank God for that.”

While thanking God for the heights attained, Maikobi attributed the successes to the officers and men of the Division for their unalloyed loyalty, support and cooperation as well as commitment to duty, urging them to extend the same loyalty and cooperation to the new General Officer Commanding.

Adegboye, who was previously the Director of Joint Studies, Armed Forces Command and Staff College, Jaji, Kaduna State, wished the out-going GOC success in all his future endeavours with the Nigerian Army.

According to Colonel Aliyu Yusuf, Deputy Director Army Public Relations 82 Division, the outgoing GOC, Maikobi will be proceeding to Defence Headquarters, Abuja to take up his new appointment as Director Campaign Planning.

It would be recalled that Brig.-Gen. Adegboye had previously served as Command 82 Division Garrison from January 2017 to January 2019.