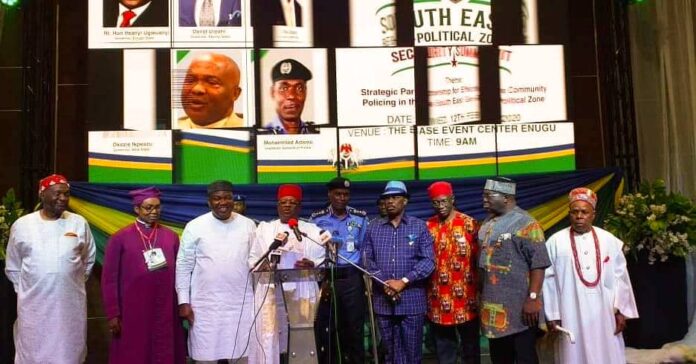 The South-East governors, on Wednesday, during the South East  Security Summit with the Inspector General of Police, pledged their commitment to support Federal Government community policing initiative meant to pragmatically involve community dwellers in security network.

The Chairman of South-East Governor’s Forum, Gov Dave Umehi, made the pledges while reading out the communiqué reached by South-East governors at the South-East Geo-political Zone Security Summit held in Enugu.

Umahi said that in reaching the arrangement, the forum took cognisance of various grassroots security outfits such as Operation Kpochapu, forests guard, vigilance group and neighbourhood watch already existence in the zone, which operates close to the modal of community policing.

He said, “The state governors have accepted and adopted community policing in bringing policing closer to the grassroots.

“Each state will mandate and ensure that community policing committee made up of traditional rulers, religious leaders etc will be established in each community to be in-charge of the recruitment of personnel and monitor security developments in the various communities where they exist’’.

The chairman said that the governors had also resolved to improve the capacity of their various community policing security outfits and the governors in synergy with the Nigeria police undertake periodic security raids.

He noted that the governors had agreed to share intelligence and information on security as well as provide adequate job and skill engagement for their teeming youths.

According to him, there will be quarterly meeting among the governors to review the entire security situation and smooth workability of the initiative and the zone will continue to partner the police to achieve all these.

Earlier, the Inspector-General of Police, Mr Mohammed Adamu, noted that he instituted the geo-political security summits due to the increasing complexity of crime and the challenges of policing a vast and diverse country.

Adamu said that the meeting would engender public trust, consent and partnership that remained the foundation upon which policing rests.

“The attainment of this objective requires the adoption of citizens-driven pathways for the purposes of identifying, dissecting and prioritizing security threats, and working together to evolve strategies directed at tackling these threats. This is essentially, is the purpose of this summit.

“The community policing model being envisioned for Nigeria under the current dispensation is one that will draw on the legal opportunities provided by the Police Act for the engagement of Special Constables.

“Who in this instance, will be engaged as community policing officers under the coordination of the Nigeria Police toward evolving a community-focused policing architecture,’’ he said.

In hia welcome address, Gov. Ifeanyi Ugwuanyi of Enugu State thanked the IGP for the summit and hosting it in Enugu State, adding that the state government would continue to support Federal Government’s move to reposition security nationwide

Speaking, Archbishop Emmanuel Chukwuma, who spoke on behalf of the clergymen in the zone, urged Federal Government to redouble its efforts to reduce insecurity especially kidnapping and farmers/herders clashes within the zone.

Chukwuma, who is also the Archbishop of Anglican Archdiocese of Enugu, also urged the police to reduce number of policemen guarding wealthy and influential people within the zone.

Agubuzu, who is also the Chairman of Enugu State Traditional Rulers’ Council, noted that the traditional rulers would support the governors and legislators to ensure that the initiative work in each community.

Contributing, Chief Nnia Nwodo, President-General of Ohanaeze Ndigbo Worldwide, lauded the police boss and the Federal Government for the initiative.

“However, I want the police to work hard to beef-up its trust and confidence among the people of the zone.

“You must review the number of check-points in the zone, which has turned to tollgates and it is truly angering the people of the zone.

“I will continue to complain on the continuous destruction of farmlands by cattle and herdsmen that move about with AK 47 within farmlands within the zone,’’ he said.