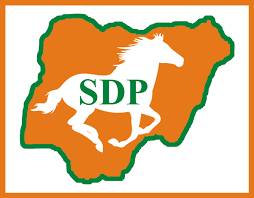 National Chairman of SDP, Chief Olu Falae stated this Wednesday during the official decamping rally of Chief Emmanuel Bello to SDP at the Lamido Cinema of Adamawa State.

“I have come to receive Chief Emmanuel Bello and a hundred thousand others who have dumped APC and PDP to join SDP from today they have become a bonafide member in the state.

“SDP has been in existence since the year 1982 during Abiola and Kingibe’s regime adding that Bello is a man who believes in Changing the Change,” he stated.

Also speaking, National Leader of the SDP, Professor Jerry Gana said this was the first outing they had made in the year 2018, adding that the party was moving to make Nigeria better.

Another National Leader of the Party, Professor Tunde Adeniran added that SDP was going to move the country forward.