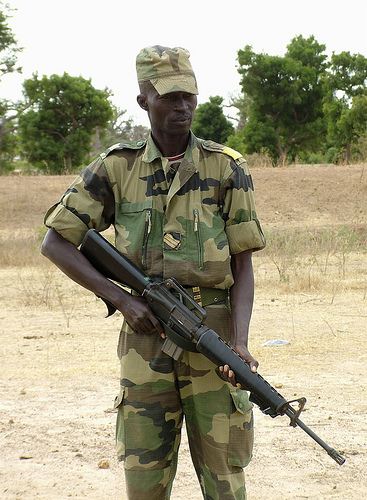 As many Nigerians continue to react to the Dapch girls’ kidnap drama, a certain
Nigerian Christian soldier, Sergeant David Bako from the Middle Belt, Plateau State to be precise has revealed how the Dapchi girls kidnap drama was plotted and executed.
He said he found it absolutely necessary to make the confession considering the criminal killings across the country which he likened to ethnic cleansing.
In an email sent to our newsroom here in Paris, Sergeant David Bako said the plot was planned and rehearsed for two weeks by Buhari’s loyalists in the army of which he was one.
He said the desperation by Buhari to rule Nigeria for another four years drove him on to employ all means to make sure he remains in power.

President Buhari, he said, will be no pushover in 2019 because he has perfected plans to remain in the Villa beyond 2019.
Continuing the story, he said, they were given N80 million to execute the plot to restore the peoples’ waning confidence in the Buhari government as Boko Haram stepped up attacks recently which was a complete embarrassment to the Buhari government after claiming to have defeated the Islamist sect.

He said the resurgence of Boko Haram attacks and killings in the northeast drove the government to find all means possible to regain the peoples’ confidence seeing that 2019 election is as good as lost. Buhari, he said, does not want to leave the Villa under any guise in 2019. In the email below he narrated how the plot was planned and executed.

He wrote: ” I feel constrained to make this confession and as I make this stunning confession, I am no longer in Nigeria because I have to unavoidably desert the Nigerian Army to save my life and that of my family from a possible summary execution by Buhari’s secret agents.
Barnawi faction of Boko Haram knows nothing about the abduction of Dapchi girls. We were paid N80 million to carry out the abduction which we planned and rehearsed for two weeks to make it look real. 16 of us, strong Buhari’s loyalists took part in the plot and were given N80 million and some trucks with which to carry out the operation.
On February 19, 2017, after we had received the money, we were told to make it a top secret and further told we would be handsomely rewarded if the plan pays off. The plan, according to our unit commander, is to make Nigerians regain their confidence in the Buhari government, demobilize the PDP which we all dislike with a passion and the Obasanjo coalition which the Villa saw as an emerging threat if something is not urgently done.

Obasanjo, our commander told us will succeed in dislodging Buhari from the Villa in 2019 if we do not contrive a means to make Nigerians believe more in Buhari’s leadership.
The money we got was not paid into our accounts but was brought by car from Abuja totaling N80 million naira which was shared amongst us with trucks to carry out the operation.
On that night the soldiers stationed in the neighbourhood were deployed to other locations to enable us carry out the operation hitch-free which we did. The Boko Haram flag you saw us carrying was designed by us and had ourselves wrapped up like the insurgents.
There was no such thing like kidnapping by the Barnawi faction of the Boko Haram. We drove into the school compound in a commando style, broke through the school gate while the night guards numbering three or more ran for their dear lives as they heard our gunshots and chanting Islamic war songs amid ‘Western education is a sin”. We drove straight into the school dormitory and ordered the girls to get onto the trucks some of whom slept naked because of the scorching heat. Although we had been given warning by our commander not to molest or rough handle the girls as such action would not be tolerated under any guise.
We were given 1 hour and 45 minutes to carry out the operation from where we drove to the school and the operation did not last for more than 45 minutes to get the girls on board the trucks. So they had no time to carry any of their belongings.
We drove them to an undisclosed location which was unknown to any of us because our unit commander led the way until we arrived in where they all were carefully kept.
The claim that five of them lost their lives is of course not true as we did not kill or even shoot any of them following the strict orders and instructions that they should be treated gently, kept safe and unharmed.
While where they were kept we were told to preach to them, make ourselves look like terrorists to enable them to believe, recount and narrate what they saw which would make people believe the abduction story.
We were not allowed to go with our phones to the location where the girls were kept, therefore we could not take photographs of the girls and the location. Was there any statement released on the abduction by the Barnawi group? Was there any video footage by the Barnawi group like that of the Chibok girls? That was to make it a top secret which the government does not want to play it.
On the day we were asked to return the girls, police and our colleagues were deployed out of the route to avoid any possible confrontation – I mean with those who knew nothing about the plot.
While leaving, we told them to embrace Islam and gave them clothing because some of them were taken away naked with wrappers they slept with when we abducted them from the dormitory.
Out of the money that was shared, I got N3 million and on second thoughts I decided to return the money to my unit commander to keep it for me as I have no ready use for the money. I told him I would be traveling to Jos to see my mother who was very ill and that on return I will collect it back from him and take it to my bank.

READ ALSO  Atiku Is Right, We Transmitted Results To A Server

Unsuspicious of my motives, he collected it from me and gave me five days to report to my duty post. With the visa I had in my passport I had to go as far as Port Harcourt where no one knows me and flew out of the country while asking God forgiveness for the part I played in the whole operation. What actually made me repent of the evil is the plot on the ground to carry out ethnic cleansing in Nigeria and as I write this piece, I make bold to say here that every Nigerian community in the southern part of the country has been infiltrated by armed militias imported from Niger, Mali, and Chad by the Buhari government to unleash terror on Nigerians if they by a twist of fate resist the ongoing ethnic cleansing.

My colleagues have often boasted that the Quran, according to the late Sardauna, must be read in the sea and that is what this government is doing. The Dapchi girls purported abduction is to make Nigerians believe the Buhari government is working and it would, therefore, make no sense to vote him out.
The remaining four years is to make him execute the hidden agenda to carry out ethnic cleansing. The plot on the ground is to have every dissenting voice executed that would be a threat to the successful execution of the agenda. That is the reason why they first came up with the cattle colonies which the southern leaders rejected.
As I write this piece, my heart bleeds for Nigeria and I regret the part I played in the abduction of the Dapchi girls to further swindle Nigerians into believing Buhari is the best person to lead the country in the coming years. Please Nigerians, I beg for forgiveness and ask you to help me with prayers to God for forgiveness in the role I played. Share this story and let it go round to save Nigerians the grave danger of allowing President Buhari to continue beyond 2018 in the Villa. I will return to Nigeria when Buhari leaves power, God willing.”