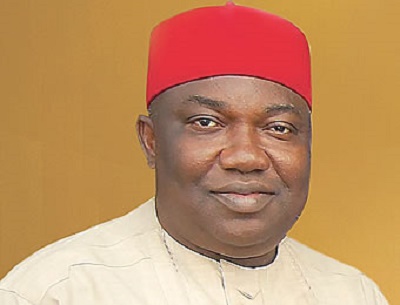 Enugu  state needs a selfless leader not a selfish leader using religion to divide the state. We need to wake up, stop burying our heads in sand and stand up for ourselves.

I want to ask all those shouting that gburugburu made Enugu peaceful if there was war in Enugu before gburugburu came to power? Were we in chaos? What exactly has he done to make Enugu peaceful? Does this peace include bribing and shutting up local media from asking him questions about the 40 men that were killed in Nimbo under his leadership?
Does it explain the fact that he collects over 300 million a month security vote and was told one week before the attack in Nimbo and he did nothing to prevent the attack? Does this peace include the fact that after that attack he declared three days fasting in Enugu, ran to Abuja to defend Buhari and later went into party with other political leaders in Abuja while people were grieving in his zone?

Does this peace include the fact that after that attack, two other attacks happened, including the one that led to the killing of a seminarian? Does the peace include the fact that he has now got all the reasons to ban nomadic cattle rearing in the state but he chose to invite the Sultan of Sokoto to come and laugh at the people and tell us that it was not Fulani herdsmen that killed our brothers?

I am searching for what he did to bring peace when he superintended over the biggest massacre of Enugu people since the civil war. Does this peace include the fact that he kept quiet when one of his men went and beat up a permanent secretary in the state secretariat and he never said a word?

Let me even ask you, a Gov comes in and tells you that he has improved security in the state and goes out and spends hundreds of millions of your money on 8 bulletproof Range Rover, 8 bulletproof Lexus Jeeps and 8 bulletproof BMW 7 series. He swaggers around with more than 50 security men and you still believe him? Why spend near to N1 billion on bulletproof vehicles when you have a peaceful state?

Mr Peter Obi used 3 Peugeot 406 which he bought with about N15m and nothing happened to him, but the peace bringing Gov has spent more than he has spent on schools and hospitals on buying bulletproof cars for himself and his family. How can you spend almost N1 billion on cars when our schools have leaking roofs? How can you do that when we have no hospitals, no industries and no Jobs?

He could spend almost N1 billion on bulletproof cars to protect his family but he cannot use N100 pen to write a letter to the house of assembly to make a law banning herdsmen activities in the state. maybe, As a professional crier, he is waiting for the herdsmen to strike again so he can cry again.

This is not what we call security, this is not leadership. It is wickedness, it is insensitivity and it is stupidity. Enugu  state needs a selfless leader not a selfish leader using religion to divide the state. We need to wake up, stop burying our heads in sand and stand up for ourselves.