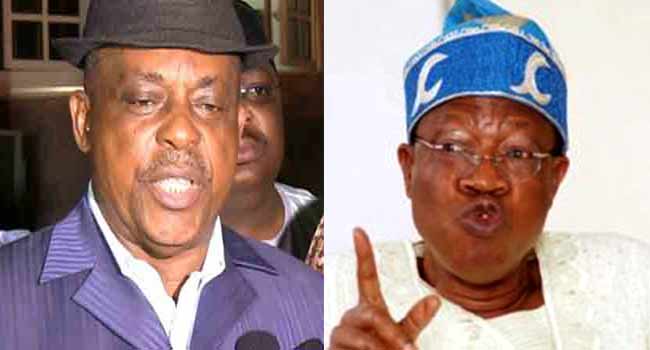 A media aide to the PDP National Chairman, Ike Abonyi, revealed this in a statement on Friday.

Mr Mohammed had mentioned Mr Secondus in the list of those who allegedly looted the nation’s treasury, alleging that the PDP National Chairman collected received N200million from the former National Security Adviser (NSA).

In his reaction, Secondus had through his lawyer, Mr Emeka Etiaba, denied collecting any money from the former NSA.

He had consequently asked the minister to immediately retract his name on the list and demanded a public apology and payment of N1.5b damages within 48 hours.

“We shall within 72 hours from today (March 31, 2018), proceed to a court of competent jurisdiction to ventilate our client’s right under the law and shall further seek the protection of the court against you,” Secondus’ lawyer had told Mohammed in a letter on Saturday last week.

Having failed to meet the demand, the PDP National Chairman made good his threat today (Friday) and filed a suit at the Port Harcourt High Court in Rivers State.

In the suit no/PHC/1013/2018, he asked the court to award him the sum of N1.5b as damages for “humiliation, castigation, vilification attack on his person and integrity as a result of the publication.”

He also claimed that the list published by the minister was defamatory and urged the court to direct Mohammed to retract the said publication and apologise in writing.

Secondus wants the retraction and apology to be published in all social media platforms and other media organisations where it was earlier publicised and broadcasted.

He further asked the court for a perpetual injunction restraining the defendant from further publishing defamatory materials against him.

Joined in the suit are the Federal Government of Nigeria through the Attorney General of the Federation and a publishing firm.

However, the minister and other respondents have yet to respond to the suit.

Mr Mohammed had told reporters on Friday last week in Lagos that the decision to reveal the list was prompted by the PDP’s call to the government to publish the names of those that alleged looted Nigeria’s treasury.

Also on the list are former PDP National Publicity Secretary, Mr Olisa Metuh, and an erstwhile aide to former President Goodluck Jonathan, Dudafa Waripamo-Owei, among others.