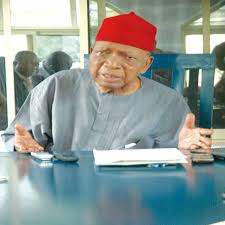 A renowned constitutional lawyer, Prof. Ben Nwabueze has said that if President Muhammadu Buhari-led government continues its alleged injustice on the Indigenous People of Biafra, IPOB, Igbo elders be forced to takeover the agitation.

He said this while insisting that he will not be part of any kind of peace talk until the Federal Government reverses the proscription of the IPOB and removed it from its list of terrorist’ organisations.

He stated this when the leadership of IPOB visited him in his Kosisieme Family Estate residence in Atani, Ogbaru Local Government Area, Anambra State.

The IPOB had gone to apologise to him and the leadership of Eastern Consultative Assembly, ECA, for disrupting their meeting in Enugu on February 27, 2018.

Prof. Nwabueze said, “If the injustice being meted by the Federal Government on IPOB is not addressed, it will get to the stage when it will become an all embracing Igbo movement, that elders like me will take over the agitation and it will spell doom for the country.

“The injustice meted on Ndigbo and everything concerning them in Nigeria, justify the agitation by IPOB,” adding that “injustice against Ndigbo, dates back to 1965 when the Governing Council of University of Lagos, dominated by the Yoruba attempted to illegally remove a Vice Chancellor of Igbo extraction of the institution, Prof. Enyi Njoku.

“We fought the Federal Government of Alhaji Tafawa Balewa to a stand still. I was arrested and sentenced to six months imprisonment by a Yoruba Magistrate for leading the protest and we appealed the judgment and a Sierra-Leonian Judge, J.S Taylor threw the judgment away and reversed my six months imprisonment and I regained my freedom and there was jubilation everywhere in Lagos by Ndigbo.

He lambasted the current administration for proscribing IPOB when organisations and associations like armed herdsmen, whom he said had massacred and slaughtered many Nigerians and are still killing people, have not been proscribed or declared a terrorist organisation.

“I will not in any kind of peace talk so long as IPOB remains proscribed, so long as IPOB remains a terrorist group or organisation in the eye of the Federal Government. IPOB is only agitating for Biafra and self determination; they have killed nobody. On the contrary, IPOB members have been killed and are still being killed by the Federal Government’s troops.

“Nothing has been done to those who have committed murder and slaughtered innocent and law abiding citizens. You have not even disarmed the herdsmen, they are still moving about with AK 47riffles slaughtering people all over the places.”