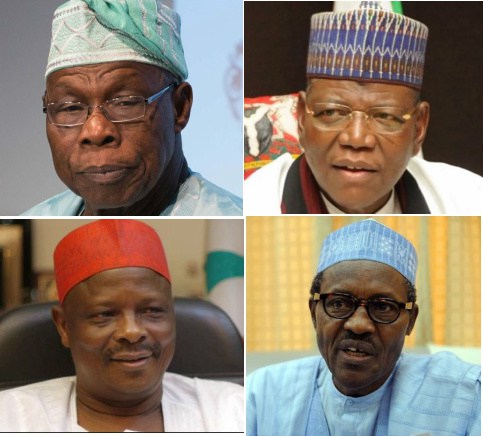 Following President Muhammadu Buhari’s declaration of intention to run for a second term in next year’s Presidential elections and the likelihood that he may narrowly win the polls (going by current exit Polls survey exclusively obtained by The New Diplomat from a top United States Polling firm), former President Olusegun Obasanjo has intensified his determination to checkmate Buhari in the race towards 2019 polls.

Top level diplomatic sources confided in The New Diplomat that Obasanjo leveraging on his high-level international reach, has reportedly escalated global pressures aimed at  dissuading President Buhari from running for a second term, citing among other reasons, the latter’s  ill-health and lack of sufficient capacity to handle the critical task of governance. A senior diplomat in New York told The New Diplomatthat in the last couple of days, ”Obasanjo has been reaching out to some key voices that are influential within the G-7 leaders to help talk to the President to re-consider his decision to run for a second term, but frankly I don’t know how far that would go because Nigeria doesn’t seem to be an urgent subject on the radar of the international community at the moment.”

The G-7 nations which are the countries with not only the largest economies, but also with the most advanced technological and military capabilities world-wide comprise France, UK, Germany, Japan, Italy, Canada and the United States. They also represent more than 62% of the global net wealth. The European Union is also represented within the G-7. This year’s G-7 Summit holds in Quebec, Canada in June.

But the diplomat quickly added: ”That doesn’t mean that they (International community) are not concerned about Nigeria’s challenges and prospects. They are. Nigeria is  the major force in the sub-region and they are concerned that any political eruptions could be catastrophic for the region hence they are concerned. But we may also look at it from two perspectives. If you stop Buhari from running, there are consequences which are far graver than if he runs. If he doesn’t run, what are the consequences you may ask? It is not that straightforward. There are big consequences for Nigeria which a new President might not be able to contend with…”

Notwithstanding, this scenario as painted by the senior diplomat who is in the picture of the unfolding political developments from the international perspectives, Obasanjo is said to be pushing very aggressively to stop Buhari from running.

Investigations reveal that central to Obasanjo’s push is a senior retired African-American diplomat who has considerable reach and leverage to get the ears of some strategists within Trump’s team. Sources confided in The New Diplomat that Obasanjo’s strategy is to market two candidates as the right choice for Nigeria at this critical stage while ”running down Buhari before the international community”

Our checks reveal that the two candidates on Obasanjo’s table are Alhaji Sule lamido and Senator Rabiu Kwankwaso in that order. Alhaji Sule Lamido with Donald Duke as his running mate is said to be Obasanjo’s first consideration. Lamido, who was former governor of Jigawa State and a foreign Minister under Obasanjo’s administration is considered a very strong political force that would give Buhari an effective fight up North. A product of malam  Aminu Kano’s political school of thought – the Talakawas – Lamido’s name has reportedly featured in some discussions in key circles in Washington. If Obasanjo goes for him, he would then switch from Peoples Democratic Party (PDP) to SDP and run on that platform. He will move along with him many faithful in the PDP. Lamido recently held a rally in Jigawa which reportedly brought the state to a standstill and shook the North West political zone.

Sources said the second choice is Senator Kwankwaso, the immediate past Governor of Kano State. Immensely popular and with much political gravis, Kwankwanso ran against Buhari in the 2015 APC primaries and it was the intervention of former Lagos State Governor, Asiwaju Bola Tinubu who gave Southwest to Buhari en-bloc that saved the day for the President. If he is tipped on the SDP ticket, he would run with a South-Easterner who is a current Governor on the ticket of the PDP.

It was further gathered that two new generation banking chiefs and an Oil magnet from the South-East who played key role in the Oil industry during the last administration of former President Goodluck Jonathan have pledged financial partnership to the whole project.