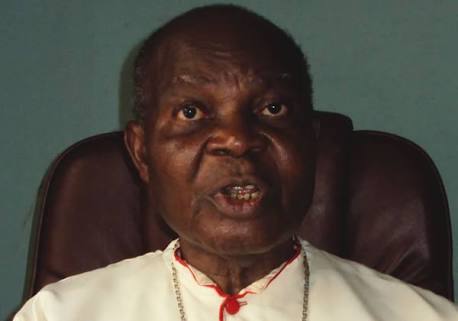 ARCHBISHOP Emeritus of Lagos, Anthony Cardinal Olubunmi Okogie, has cautioned politicians he says are manipulating President Muhammadu Buhari to seek re-election next year to take time to gauge the mood of the nation or risk plunging Nigeria into an “unnecessary revolution”.

Okogie, however, affirmed the prerogative of any human being to aspire to be anything in life, saying, “Every citizen of Nigeria has the freewill to do whatever he or she desires to do. So, as President of the Federal Republic of Nigeria, he can hearken to the voices of people to aspire to any height.

“But I know that the voice of the people is the voice of God. And I can tell that the general opinion of Nigerians, going by what I have been reading in newspapers, is that he (President Buhari) has not done well. And for him to come from such background and wants to re-contest for another four-year mandate is absolutely left to him”.

Cardinal Okogie
He went on, “But just as he (President Buhari) has the freewill, the people of this country also have the freewill to elect according to their conscience. Like I said, the popular assessment of his performance in the last three years is dismal and the generality of the people will prefer that he retires and allow other Nigerians to make their contribution to the nation’s development. “They don’t want to see him in the saddle again because he has performed poorly, but if he wants to force himself there, I don’t know how he will do it….but I can only say good luck.

“You can even see it from the opposition party’s standpoint. For example, the APC has been releasing lists of alleged looters of the nation’s treasury and the opposition party, the PDP, has consistently raised objections, claiming that some members of the ruling party have been, at different occasions, indicted of corruption, but, up till now, the APC is yet to respond. PDP had asked very salient questions bordering on the so-called list of alleged looters but what has been the response from the APC? The PDP has made very weighty allegations but they not responded. If they are convinced of their anti-corruption war, they should openly respond to the questions raised on the alleged looters lists. But so far, there has been no reply from the APC.

“I hope they are assuming that Nigerians are sleeping. For example, there are various opinion articles in newspapers, I have sent out a couple to the media which have been published but what has been the response to them? Nothing! Nobody has said a word about all that I have written about in the last couple of months. I want them to react; but thus far, there is no reaction.

“I am not a politician, but I can say to you now, that politics in this country has changed drastically. It’s no longer what it used to be. No! Those days are gone for ever. For example, when the former Defence Minister, Gen, Theophilus Yakubu Danjuma, threw the gauntlet and urged Nigerians to defend themselves when they come under attack by these mindless insurgents, majority of Nigerians supported that call because it reflected the mind-set of the vast majority of the people.

“Let me tell here and now, if he gets there (re-election) by hook or crook, people will revolt. Mark my word! Even if he wins, people will revolt and Nigeria will not be comfortable with him anymore. Nigeria has changed. It’s no longer a country of yes, yes. No! Not anymore. There will be revolution. Even if he puts somebody they don’t like, they will not accept”.

But there are Nigerians who believe there is no alternative to President Buhari. Do you agree?

How can I agree? That is not true. They are flatterers. If we put any other Nigerian in power, he will perform. Why did President Buhari not back the calls from different parts of the country for restructuring? Why? They know what they are doing, but I tell you Nigeria is not for one person or for one region. Nigeria is for us all. I am not a politician but every Nigerian can read me. Like I said, Nigeria has changed. Did Olusegun Obasanjo not desire to have a third term in office? Did he not fail?

What is your advice to Nigerians at this point?

I don’t know. But like everybody is advising, people should go out and register and make sure they vote when the opportunity comes to elect the next President, but the problem is that you know the kind of Nigerians we have. I have said it, even if he wins tomorrow, he will not be comfortable in the seat, because, number one, most Nigerians will query how he got there. From what I am seeing now, a time will come when people will be killing themselves like chicken. And I think the time is here with us already. Look at what is happening in Borno, Benue, Taraba among other places in the country….and Buhari has not said a word!