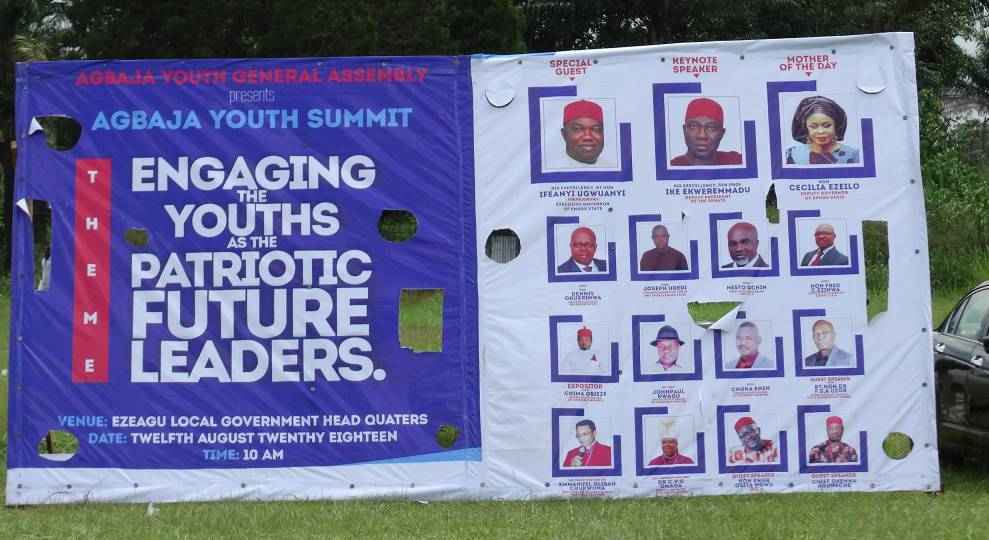 Agbaja Youth General Assembly (AYGA) is an amalgam of various youth organizations from Agbaja area of Enugu State that are found in the present Day Udi and Ezeagu LGAs of the state.

The youth Assembly is an umbrella body for youths of Agbaja to come together and chant for a way forward for the youths of the area.

The Assembly on Sunday 12th August, 2018 held the maiden edition of her summit.
The summit with the theme “Engaging the Youths as Patriotic Future Leaders” was held in the headquarter of Ezeagu LGA was hosted by the Chairman of the council, Hon. Fred Chukwudi Ezinwe had over 4000 youths from Udi and Ezeagu In attendance.

In his opening remark, the host of the summit and the Chairman of Ezeagu LGA Hon. Ezinwa cautioned the youths on the need to remain dedicated in their respective fields of endeavour and not depend on anyone for their survival.

The spiritual Father of the day, The Anglican Archbishop of Enugu Ecclesiastical Province, His Grace Right. Rev. Dr. Emmanuel Olisa Chukwuma who was represented by Rev. Cannon Ejike Ezewome encouraged the youths to always seek the face of God in all they do.

Hon. Mike Uzor, The Special Assistant to the Deputy Senate President on Youth Matters advised the youths to show serious interest in political activities by first, obtaining their PVCs.

Hon. Aguneche, a House of Representatives aspirant for Udi/Ezeagu federal constituency charged the Youths to always pray very hard even as they work hard in their various business.

The Deputy Senate President who was represented by The Commissioner for Youth and Sports in Enugu State, Hon. Joseph Udedi thanked Agbaja Youths for their continuous support of the Governor, Rt. Hon. Ifeanyi Ugwuanyi and charged them to remain committed to positive morals and good ideals as His Excellency is a lover of youths.

Engr. Osita Ngwu an aspirant for Udi/Ezeagu Federal House of Representatives and a guest speaker in the summit told his story/journey to success and urged the Youths to learn from his determination to never say NO spirit when faced with difficulties.

The Member representing Ezeagu Constituency in Enugu State House of Assembly, Hon. Barr. Chima Obieze in his speech commended the Executives/Organisers of the event led by Comr. Nebo Ebube for the laudable event which is the first of its kind and urged them to continue to improve on what they have started today.

Obieze thanked all the Youths for maintaining peace & decorum during the event and charged them to remain good ambassadors of Agbaja.

He encouraged them to continue supporting the Governor of the state who has demonstrated his deep love for Agbaja people in various ways like;

●The 9thmile bi-pass road
●The reconstruction of the ancient Milliken Hill road among many others things.

After the motion, Hon. Chima Obieze was invited to put the motion to a vote to all the youths present, and they unanimously endorsed the Governor for a 2nd term in office.

The summit also called on Sen. Ike Ekweremadu PHD, CFR to please consider running for Senate seat of the zone again stating that the benefits of his stay in the senate is visible even to the blind and audible to the deaf. 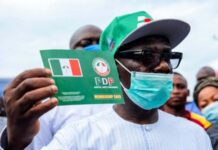