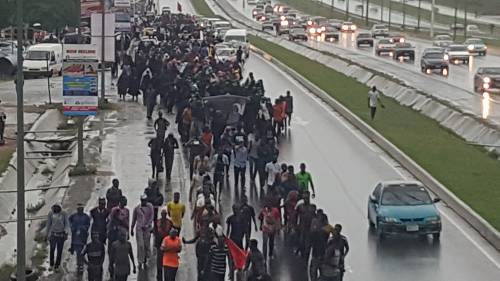 Islamic Movement of Nigeria (IMN) has waded through barricades mounted by security agents, and marched through Abuja in protest.

The protesters, who came from different states, arrived Abuja through Kubwa expressway, wielding portraits of their spiritual leader, Ibraheem El-Zakzaky, as well as flags with Arabic inscriptions.

Efforts by a combined detachment of armed policemen and soldiers to prevent the group from proceeding with the protest proved futile, as they waded through the security barricades.

The protesters, who converged on Abuja from different states across the nation, defied a heavy downpour as they chanted: ‘Free Zakzaky’; ‘Free Our Leader’.

The group later ended the protest at Citec bus stop, near Gwarinpa, a few meters away from Abuja. They, however, vowed to enter the city centre on Monday.

Those who came in through Mararaba-Nyanya axis were stopped at Abacha Barracks by stern-looking anti-riot policemen drafted to the area. It was gathered that several gunshots were fired into the air to disperse the crowd.

On Saturday, the group had addressed a press conference during which it stated that more than one million followers of Sheikh Ibraheem El-Zakzaky would converge on Abuja on Sunday to embark on the ‘Arbaeen Symbolic Trek’.

Five members of the group were allegedly shot to death by the Nigerian Army, during a violent clash at Zuba in Gwagwalada Area Council of Abuja on Saturday.

The situation led to pandemonium, as many vehicles were vandalised and residents were seen scampering for safety.