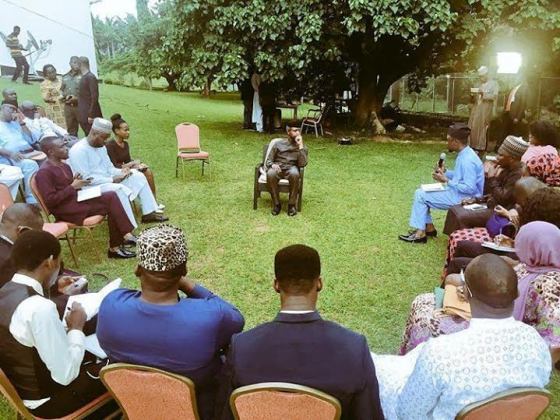 A source has told LeadersNG that some social media influencers mainly from South West extraction are on the payroll of Professor Yemi Osinbajo, Nigeria’s Vice President. The source said UK based ex OPC leader, Kayode Ogundamisi receives N4 million Naira monthly from the office of the VP through one of his aides.

Several other influencers were also named to be on the monthly package including blogger -Japhet Omojuwa, Tolu Ogunlesi (a Special Assistant to the president and some members of his electronic team), Ayourb and some members of the Buhari Media Centre from the South West.

The source said this arrangement with the vice president was put in place in 2016 but funding stopped at some point. He further added that since march this year, funding has been regular.

You will recall that the vice president of Nigeria Yemi Osinbajo met with Nigerian “social media influencers” in Abjua on Friday 27th May 2016. The meeting was put in place to mark President Buhari’s 1st year anniversary then. LeadersNG can confirm that it was after that meeting that a proposal was presented to the VP by some of the participants at that meeting and the vp thereafter approved same.

Although some of those at the meeting in 2016 that we contacted said they are not on the payroll of the vice president, our source insists many of them are.

LeadersNG understands that the Vice President maintains communications with the influencers through his media aide, Laolu Akande. It was also gathered that funds are usually disbursed through Samuel Orekoya, a media assistant in the VP’s office and the said Orekoya according to our source, pays other social media trolls and voltrons stipends to defend the Vice President.

The source confirms that the trolls are charged with responsibility of dousing dissenting voices on the the Vice President’s posts and any other related posts on the vice president on blogs and other media platforms.

A Portharcourt based lawyer and social media commentator LeadersNG spoke with said, the only reason why these young people stay up late at night defending the vice president amidst the administration’s gross incompetence is the handouts they get from the Vice President.