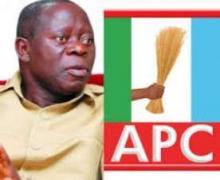 One of them said Oshiomhole had to travel to the United States as a matter of urgency, “because of a personal matter”.

Another party source said Oshiomhole is slated to return well before next Saturday, because of the federal constituency by-election in Kwara State. “He will surely return before the official commencement of presidential and National Assembly campaigns on November 18.

Don’t forget that the APC will also be participating in the by-election in Kwara State. So, the chairman is coming back to lead the campaigns,” he said.

Oshiomhole had left the country early morning of Wednesday in the midst of the furore caused by his reported interrogation by the Department of State Services (DSS) on Sunday and Monday, over alleged fraudulent activities during the primaries held in some states.

An aggrieved aspirant for Enugu West Senatorial District ticket, Osita Okechukwu, had on Thursday said that Oshiomhole seemed to have “run away to evade the substitution window meant to redress the grievances of the casualties of his inactions.”