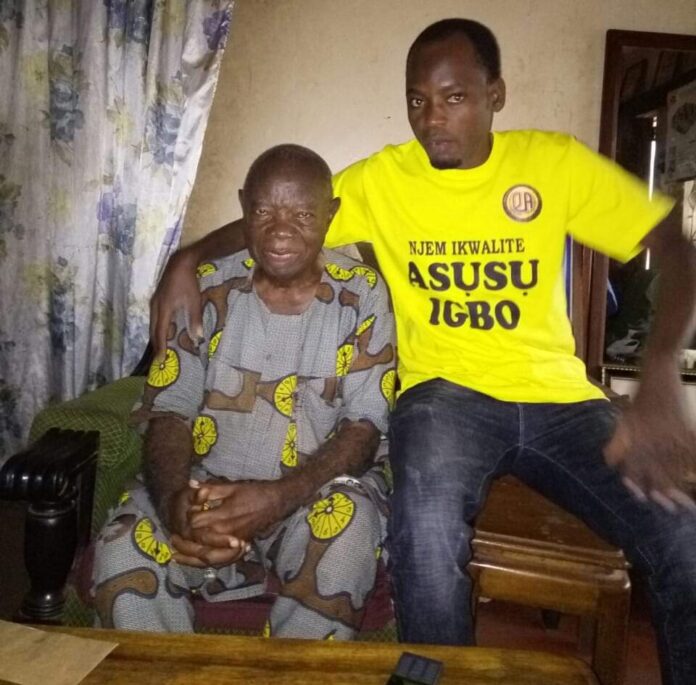 Enugu Political cyberspace has been busy with the story of the legendary folklorist, Gentleman, Mike Ejeagha as the two frontline governorship aspirants in the state, Sen. Ayogu Eze of the All Progressive Congress, APC and the incumbent governor and the candidate of the Peoples Democratic Party, PDP turned his home in Abakpa into a political Mecca.

This fireworks by politicians in the state was ignited by a social crusader and social media influencer,  Charles Ogbu, who took to his Facebook wall to narrate the current unpalatable state of the Igbo music icon.

Mr Charles who is famous for always standing with Igbo course and never failed to lend his voice in matters affecting his people visited the living legend on Thursday, 8th November, 2018.

After his visit, he narrated the condition of Gentleman Ejeagha and called on Igbo sons and daughters to come to his aid.

After 48 hours of making the post, the situation attracted politicians in the state and they wasted no time in visiting the icon.

The candidate of the All Progressive Congress, Senator Ayogu Eze was the first to enter the ring. He visited Mr. Ejeagha at about 10:45am on Saturday,  10th November, 2018. During the visit, Sen. Ayogu expressed his willingness to come to the aid of the music legend and possibly lift his living condition and that of his family.

In his response, Mike Ejeagha who couldn’t hide his joy thanked Senator Ayogu for finding time to come to see him. He wished him well in his political endeavour and blessed his political ambition to govern the state.

In a related development, the Governor of the State, Ifeanyi Ugwuanyi also visited the home of Mike Ejeagha on the same day at about 4pm told the elder stateman that the reason for his visit is to know how he is faring and see how the  government can assist him.

Mr. Ejeagha thanked the governor of the State for his visit and also appreciated all his efforts in governing the state.

The fireworks that followed the visitation of this Ezeagu born Music legend by the two leading governorship aspirants in Enugu State could be an insight to what should be expected when campaign is flagged off.

Stay with us as we will keep you updated on the political happenings in the state.