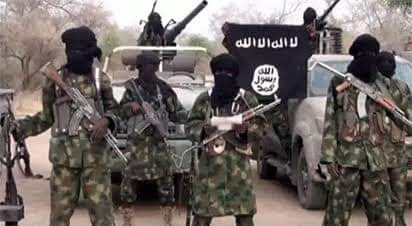 “Ignorant and useless Zamfara people where are you? We are here in your Zamfara and we are urging you to come out and face us!”- ISIS West Africa (ISWA).

These are just some of the ugly and boastful words that were spoken in a graphic video that I posted on my Facebook page by an ISWA commander and the barbarians and terrorists that are decimating and butchering our people. I had his words translated from hausa to english.

The video shows ISWA Fulani terrorists and militias on the rampage somewhere in Zamfara state boastfully challenging and insulting the people of Zamfara and telling them to come out and fight them.

Sadly their activities and operations are not limited to Zamfara or indeed the core north and the bitter truth is that they have unleashed a full-scale, no-holds barred war against the Nigerian people and state.

What is going on in Zamfara and in parts of Katsina and Kaduna state today, is that the terrorist Fulani militias are wiping out the local Hausa and other indegenous communities and they taking over and stealing their land and resources.

Like an ocean of demonic and devouring locusts that strips bare everything in its path, they move in large numbers with death on their wings. They are a dark and evil wave of life-wasting and blood-sucking zombies. They are like the infamous and terrifying ‘Army of the Dead’ in HBO’s famous blockbuster series titled ‘Game of Thrones’: they burn, slaughter, decimate and destroy every living thing that lies in their path.

Their brutality, power, military capability, boldness and sheer audacity is growing by the day and Nigeria is now in serious trouble. It is only a matter of time before they break through and make incursions into the satellite towns and environs of Abuja and then the south.

If you doubt that then know this: they have already amassed in large numbers in Nassarawa state and they have operational units, spies and sleeper cells in every state and zone in the north.

Worse still is the fact that our country is now exhibiting all the basic and fundamental characteristics of a classic failed state where, in parts of the north, the Federal Government and its security forces no longer have any control and can no longer claim to exert a monopoly of violence.

If this were not the case why would the Federal Government be offering Miyetti Allah and the terrorist Fulani herdsmen (who are the forerunners of ISWA) billions of naira to stop butchering, maiming, kidnapping and tormenting the Nigerian people and stealing their land and mineral resources. Governments are meant to fight and crush terrorists and terrorist organisations and defend their people and not beg or negotiate with them.

The Buhari administration is on record as having paid billions of naira to the terrorists in ransom and protection money over the last four years and this has strengthened the islamist insurgents and assisted their mutiny and armed rebellion against the Nigerian state enormously. That, together with the massive support and funding they are getting from ISIS and their Arab collaborators has done the trick.

Let us be clear: these people are NOT mere bandits and kidnappers. They are well-funded, well-organised Islamist ISIS-backed ISWA Fulani militias and their objective is to kill everything and everyone on their path in their quest to establish a new Islamist Fulani Caliphate and take total control of the lives and destiny of the local indigenous populations.

Under Buhari the power of these Islamist Fulani terrorists has become irresistable and unbearable and thousands are being killed in the north every day.

I saw all this coming four years ago and when I spoke out about it I was labelled as a liar, an alarmist and an extremist who hated the north and Islam and who wanted to set the country on fire. Now I have been vindicated.

Yet the saddest aspect of all this is the fact that the respected columnist Mr. Farooq Kperogi was right when he said the following just a few days ago.

He wrote, “I told someone a few days ago that if many of the people expressing outrage over the bloodbath in Zamfara are told the dead are Shias or Christians the outrage will instantly turn to joy. That’s the extent of the shallowness of the humanity of people in Nigeria”.

Our country, under Buhari, is imploding and what we are faced with is an existential threat which, if not addressed quickly and effectively, will consumme us all. May God grant us the fortitude, courage, wisdom and strength to appreciate the gravity of our situation and do something about it before it is too late.

Permit me to conclude this contribution with the words of Mr. Tony Nnandi who is one of the powerful and emerging voices in the new generation of Nigerian intellectuals and leaders of thought and who, over the last few years has displayed a very high degree of consistency ansd foresight. Yesterday he wrote,

“The Federation of Nigeria collapsed in 1966. The Fulani caliphate seized it’s carcass after killing 3.5 million easterners between 1967-1970 and imposed the 1979 unitary constitution which it revived in 1999. Seizing power in 2015 the Caliphate is now on a CONQUEST mission to wipe out the indigenous peoples so as to own Nigeria 100%”.

Whether you agree with Nnadi or not one thing is clear: if Nigeria is to survive into the distant future as one entity she is in dire need of a deliverer.

And the sooner that deliverer shows up on the scene, rises to power, puts a stop to the ethnic cleansing, genocide and mass murder and rights all the wrongs, the better it will be for us all.

A group from the South South zone of our country known as the Lower Niger Congress put it succinctly when they said,

Sad as it is, they may well have spoken the bitter truth.