Reno Omokri who described Tinubu as a “used sanitary pad” said El-rufai won’t go as far as ridiculing Tinubu in Lagos of all places without Buhari’s buy in.

“Bola @AsiwajuTinubu should know the game is up when @MBuhari’s protege, @Elrufai, openly insults him. Don’t be deceived. El-Rufai wont rudicule him, in Lagos of all places, without Buhari’s buy in. They’ve finished using him. He‘s now as useful as a used sanitary pad! #RenosDarts” 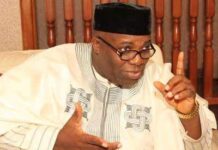