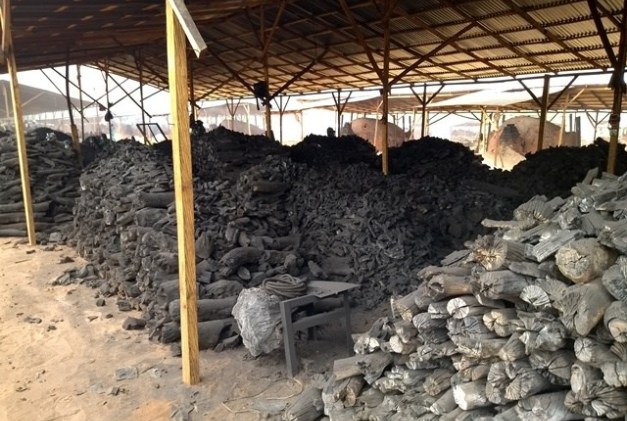 AN illegal charcoal factory by a Chinese company in Enugu State has continued operation after more than two weeks that the facility was purportedly sealed off by the National Environmental Standards and Regulations Enforcement Agency (NESREA).

In a press release last Wednesday, NESREA claimed that the facility had been shut down, but The ICIR obtained evidence the following day that the company was still in operation.

Investigation by The ICIR, published February 19, had triggered public outrage against the illegal charcoal production and led to pressure on NESREA to close up the factory.

At the time The ICIR conducted an investigation into the illegal activity of the Chinese company, NESREA said it was unaware of the massive felling of trees for charcoal production, and would not act against the company without a petition.

Nearly two months after The ICIR report, a press statement was issued by Sule Oyofo, NESREA’s deputy director of Press, claiming that the charcoal factory by Kwo Chief Investment Limited in Nsukka, Enugu State had been shut down for operating illegal charcoal production and export, adding that the operators would soon be prosecuted.

The ICIR, however, obtained evidence that the charcoal production has been ongoing and the company never stopped its operation days after NESREA’s purported eviction order.

This video was shot at the factory in Obimo, Nsukka on Thursday, May 9 and it shows that business was yet uninterrupted in the factory.

Professor Aliyu Jauro, the director general of NESREA, told The ICIR on Monday that the agency actually sealed off the facility but he was unaware that the company had continued the charcoal production.

As evidence, he showed pictures of the facility being sealed off by the agency’s officials on April 24. He said until the recent amendment of NESREA’s act, the agency had to obtain a court order before sealing off facilities of environmental offenders.

He disclosed that a member of the House of Representatives from Plateau State has an interest in the company, adding that he asked two men who came to represent the company to leave his office.

Jauro said that NESREA had applied to Corporate Affairs Commission (CAC) to find out the real owners of the company but has not gotten a response yet.

READ ALSO  Onnoghen: We Have No Case Against Him Anymore- FG

“We are just getting the information,” he said after The ICIR told him that the company has been operating since the agency claimed it shut down the charcoal production. “But we will do something about it.”

Jauro continued. “We would make arrangement for our men to go there, but also backed with security. This situation is worth pressing charges because it is hazard violation. We wouldn’t leave them to continue.”

A source at the factory had told The ICIR that NESREA staff demanded N30 million bribe from the Chinese company but it was willing to offer only N10 million then, and later agreed to pay N15 million which the agency’s officials allegedly rejected.

Therefore, the company last two weeks informed locals to stop supplying logs of hardwood because the factory would stop operation after exhausting its remaining stock.

When The ICIR called Sule Oyofo, NESREA’s deputy director of Press, on Wednesday afternoon to confirm the allegation of demanding N30 million bribe from the company, he said the director in charge of the matter was not in the office at that moment.

He later called the reporter to say that NESREA had issued a press statement and he should send his email address to receive it.  NESREA’s statement, which was published by numerous media outfits, failed to mention the date the factory was shut down by the agency.

But Pele Egbagiri, NESREA’s Enugu field office coordinator, confirmed in a text message that the factory was sealed off on April 24.

He, however, said he was unaware that the factory was still open for charcoal production after more than two weeks that it was purportedly sealed off. “Not aware of that, except a compliance monitoring visit is carried out to the sites to confirm,” he wrote.

Egbagiri denied the allegation that NESREA demanded N30 million from the company. “Is that an accusation?” he asked. “False, anyway. Please refer your inquiries to NESREA headquarters.”

NESREA’s DG, told The ICIR in an interview that the staff that went to the site of charcoal production did a commendable job and did not demand bribe from the company.

Below is the full press release issued by NESREA.

“The National Environmental Standards and Regulations Enforcement Agency, NESREA has shut down one of the facilities of a Chinese company, Kwo Chief Investment Limited, located at Obimo in Nsukka Local Government Area of Enugu State for illegal production and exportation of charcoal in Nigeria. The matter will be charged to court shortly.

“Following public complaints on the activities of the company, NESREA had dispatched officers to investigate the allegations leveled against the company. Investigations showed that the company was operating illegal charcoal production facilities at Ikem and Obimo in Isi-Uzo and Nsukka Local Government Areas of Enugu State respectively without permit. This runs contrary to the provisions of the National Environmental (Control of Charcoal Production Export) Regulations 2014.

“The Regulation states that ‘……. a person shall not undertake or engage in any undertaking or activity relating to commercial charcoal production or handling without a valid permit issued by the Federal or State Department of Forestry’.

“The regulation also provides that, ‘a person shall not be granted a permit for charcoal production without having a reforestation and rehabilitation plan for the area from where the charcoal will be derived or produced.’

“The Director General of NESREA, Professor Aliyu Jauro had warned facilities to desist from flaunting environmental laws in the country. Addressing newsmen recently, Prof Jauro said with the amendment of the Act setting up NESREA, the Agency was set to heighten it enforcement activities. He charged companies to ensure they obtain relevant permits as erring facilities will be sanctioned.”