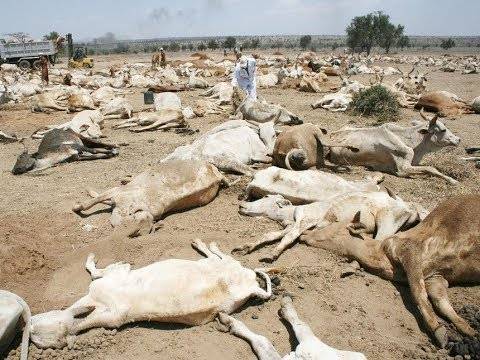 No fewer than 36 cows have been killed by a thunderstorm at Ijare, under Ifedore Local Government Area of Ondo State.

The incident happened on Saturday at Oke Owa Mountain, a sacred area in the community.

SaharaReporters learnt that the thunderstorm was accompanied by rainfall, which lasted several hours.

Our correspondent, who visited the community, observed that the incident has caused panic among residents of the town.

Some of the locals revealed that the strange incident occurred when some Fulani herdsmen led their cattle to the scared mountain in the community.

“On Saturday, I saw the Fulani herdsmen with their cows while they were entering the bush and climbing the mountains.

“But this morning, a hunter that was passing came to inform us that he saw the same cows but they were already dead.

“We rushed there and was shocked to find the cows all dead,” one resident, who identified herself only as Amara, said.

Olaniran said the incident was a rude shock to the community and was regarded as an act of God.

He said, “We counted no fewer than 36 cows already dead. They would be there and no one would be allowed to touch them.

“The place is not meant for ordinary people and even the king that goes there, does so with great caution.

“Incidents like this happens when people desecrate the scared land.”

Spokesperson for the police in Ondo, Femi Joseph, confirmed the incident when contacted.