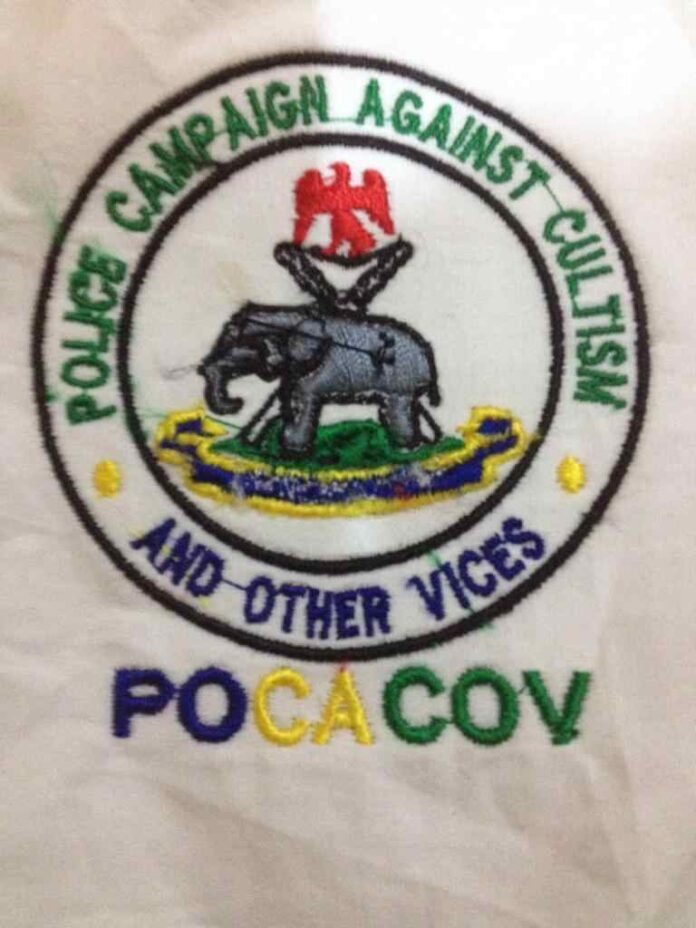 Police Campaign Against ccultism and Other Vces (POCACOV ), an initiative of the Inspector General of police, IGP Mohammed Abubakar Adamu, Npm, mni, aimed at saving Nigerian youth from the claws of cultism, associated violence and other vices and getting those involved back to the society by deradicalizing them through reorientation, which will further make them better citizen and be able to contribute their quota towards the growth and development of the nation.

POCACOV has a unique characteristics anchored on the fact that it is community driven under the tenets of community oriented policing to cut accross all relevant stake holders and that is why the programme, POCACOV; is all about you.

The involvement of artisans such as Drivers, bus conductors, Mechanics, commercial motorcyclists, boat drivers, traders, barrow pushers amongst others, has clearly shown that the cankerworm is no longer an academic malady alone but socio-economic and academic malady and so may not be out of place to say that the society is sitting on a keg of gunpowder.

There is also female as well as secondary and primary school involvements.

Some youths don’t even know why they get involved although, studies has shown that some join to be protected, famous and to gain respect while others join out of ignorance ranging from coercion and peer group influence and empty promises.

There is also involvement of some political class who usually make use of these youth to fan embers of violence.

This is the time to support the Inspector General of police, IGP Mohammed Abubakar ADAMU Npm,Mni  by identifying with and supporting this great proactive programme with unique characteristics of sustainability and durability as well as community oriented aimed at reducing the incidences of cultism, associated violence and other vices in our society.

The programme has strong collaboration with the National youth service Corps (NYSC) which gave birth to the NYSC POCACOV Community Development Service (CDS), which was inaugurated by the Inspector General of police during the National flag off of POCACOV in August this year in Enugu.

READ ALSO  Why Ekweremadu Has A Choice By Majeed Dahiru

There is also, the use of notable comedians, actors, actresses as well as musicians under POCACOV ambassadors.

The POCACOV ambassadors are influencers .There is strong collaboration with the National Orientation Agency, NOA and the media to help deepen the campaign.

POCACOV is not a warfare and it  is now set to be deployed in all the states of the federation including the Federal Capital Territory, FCT, Abuja.

Already, the Nigeria Policing pprogramme (NPP), Match Makers Consult, owners of Nigeria pitch Awards are strongly supporting POCACOV to spread its wing. Finger off the trigger initiatives, The Nigeria National League (NNL) that deals with the youth together with Nigeria Nationwide League one (NLO) have identified with the programme of POCACOV for a progressive, safe and secured society.

POCACOV as many would say; is a programme quite on time and programme of all.

Say No to cultism, associated violence and other vices today and be a champion .You are all about POCACOV and POCACOV is all about you.