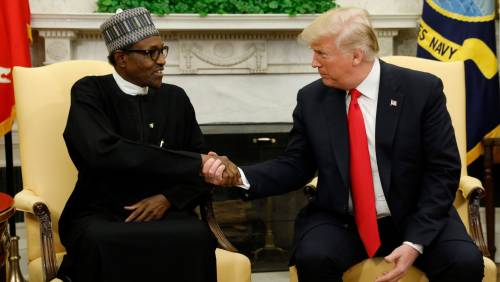 It has emerged that Nigeria has made it to the list of countries whose citizens can no longer access US Immigrant Visas. The argument is, since Nigeria does not even know her citizens well enough to track them, no thanks to a very shoddy Identity Management System (IMS), the USA was no longer comfortable admitting all kinds of elements including hardened criminals from Nigeria into their country. And, of all Trump-ish foreign policies, this one makes the most sense to me.

Imagine perpetrators of all kinds of crime including murder crossing over to America when the grass seems less healthy in Nigeria! I should know, I am a witness to tears and still can’t find closure. In December of 2018, Ngunan went missing. All her phones were switched off and her late Cousin’s wife raised alarm. At the police station, she was told in no uncertain terms that her charge may have gone off with a new boyfriend and may reappear after 2 maybe 3 days. Not even her insistence that Ngunan has no history of absconding with boyfriends was enough to convince the police officer on duty that the young lady was missing.

Unsatisfied by the Polices’ expert policing, her caregiver formed a search party of her own to comb the general area. This didn’t turn up anything so, everyone resigned to fate! After a few days of tortuous wait, her decomposing corpse was found by a construction site foreman who followed the foul smell coming out of the uncompleted building where her body was dumped. The Police was called in and this time, they didn’t hesitate to come and move the corpse. Almost immediately, an embalmer was brought in to prepare her for transport. No post mortem, nothing. The lovely lady many of us knew and loved had made it to the statistic of the many unsolved crimes in Nigeria.

According to Nigeria’s Inspector General of Police, Muhammed Adamu, 1071 people lost their life while 658 were kidnapped in 2019. But knowing how notoriously shallow Nigerian institutions are about numbers, it can be argued that the figures could be triple or quadruple the official stats. “The rate of unsolved crimes in Enugu is over 50%” says Chijioke Chinwokwu of the department of Sociology, Enugu State University of Technology. A national statistic, if it ever existed should put the numbers way higher than 50% and this will be putting it midly.

READ ALSO  Where Is The Water? APC Asks Enugu PDP

According to Chinwokwu, this shocking high rate of unsolved crime is caused by “the absence of scientific investigation techniques and lack of capacity in modern crime investigation”. This, like many other simple things has become elusive to Nigeria’s government. Recently, an Assistant Inspector General of Police, Zone 2 command Lagos, Ahmed Iliyasu was proudly describing how forensic crime investigation was used to track the killers of a kidnapped Billionaire and owner of Firman Generators, Adunukwe whose dismembered remains were stuffed into a-ghana-must-go bag and dumped in the highway. According AIG Iliyasu, the command was petitioned by the family of the deceased and officers immediately swung into action leading to the use of scientific techniques to apprehend the perpetrators. However, because Ngunan was not a Billionaire, the Police would not even initiate a phone track because that service is “reserved for those who could afford it”.

Beside the fact that criminals may have been transporting their criminality offshore for easier marks, this high rate of unsolved crimes no thanks to the fantastically incompetent security profiling system of the Nigerian Police emboldens perpetrators back home. So, when these criminals decide to venture west in search of greener pastures because their evil activities have gone unnoticed, they become a burden for their host nations. This is what America is guarding against and why I believe it’s a good thing for Nigeria if other countries will follow suit to shut us out.

In his recommendation, Chinwokwu advocates the provision of “a computerized data bank where records of all persons arrested in connection with any criminal matters are kept and especially those involving violent crimes”. But, is this the ultimate solution? Crime profiling itself benefits immensely from the availability of a robust, integrated Identity, Management database that Nigeria doesn’t seem inclined to set up.

As reported in a paper written by Ayamba Ijotong Anthony of the University of Calabar, a sound identity management system is “linked with and complements the development of the sociopolitical and socioeconomic process”. Although he didn’t quite capture it, the underlying importance of maintaining a robust Identity Management System is way above his conclusion above. It is at the very foundation of a nation’s safety; and, helps elected officials whose highest priority schedule is the protection of lives and property to deliver on that mandate. Needless to say, the reality of the failure of leaders to deliver this primary responsibility is the daily reports of soaring crime. Yet, successive Nigerian leaders continue to pay little attention to the one thing that could help them do right by the masses.

READ ALSO  Selling Falsehood To Mislead The Gullible Will Not Work In Abia Pt. 2

Unfortunately, this “key theme” of modern life has become elusive to Nigeria. A close look will reveal that the problem with Nigeria is not the absence of data Banks, but the wherewithal to use them for the good of country. With too many fragmented Identity data banks, starting from NIMC’s NIN that takes forever to mature into an actual National ID Card, to INEC’s, then banks, Higher Institutions, Network providers, Public Notaries/Drivers/Car Registration, Immigration, public and private work places etc. Nigeria could easily have been one of the nation with the largest Bank of Identity data!

Sadly though, even the independent Databases kept by agencies still pose lots of problems to manage. Take INEC for instance, it will shock you to know that they are even unable to properly sanitize their own database. This is why Nigerians can enroll for Voters Card as many times as they want within a state or across multiple states thereby aiding and abetting electoral fraud.

As it stands, Nigeria does not even know the number of her citizens and this would easily have been a question that maintaining an integrated Identity Management System can answer conveniently. As we are aware, the last census of 2006 that puts the number of Nigerians at 140 million cannot even be trusted because of allegations of data falsification. And, “in the absence of reliable data from (the Nigerian) government, global institutions including the World Bank and International Monetary Fund have been the most consistent suppliers of estimates and forecasts”. Says Yomi Kazeem writing for *www.qz.com* .

Although President Buhari dismissed the numbers peddled by these international bodies as “wild estimates which bear little relations to the facts on ground” the fact that the problem of data collection, harmonization and deployment continues to persist makes the President’s rejoinder feeble at best, and an indictment on past and present leaders of this nation. And, until something is done to bridge this reality, numbers will continue to be bandied back and forth for or on behalf of Nigeria because international organizations like World Bank, WHO, USAID etc. who have visited this nation with lots of aids require these numbers for policy planning and implementation purposes.

The fact that the world has moved into intelligence sharing in what is speedily becoming a unified approach to identity management should be a wake up call for Nigeria whose “… biggest challenge is that there’s a lot of friction between agencies. Citizens keep registering the same information all over the place, meanwhile one data set could be used by all government agencies” says Emeka Okoye, a data scientist.

Late last year, Nigeria’s minister of Finance appeared before the senate to explain why Nigeria continues to service a Chinese debt secured for installation of CCTV in the FCT, a contract that was obviously not executed! Well, but for the probe, Nigerians may never have heard of the project. The Chinese may have thought like me, that there’s no need for offline CCTV’s that are not connected to any data base from where it can cross-reference faces of criminals for instance and help in policing the nation’s capital.

In a world where data analyst feed search queries with images and even keywords leading to the detection and arrest of criminals, it is utterly embarrassing to imagine that Nigeria is still grappling with the problem of Identity Management System. This then, is the reason why the US ban is timely and should be welcomed. I wish other choice destinations for Nigeria like England will imbibe the ban. Who knows, this may just be the necessary kick that wakes the Nigerian government to its responsibilities!