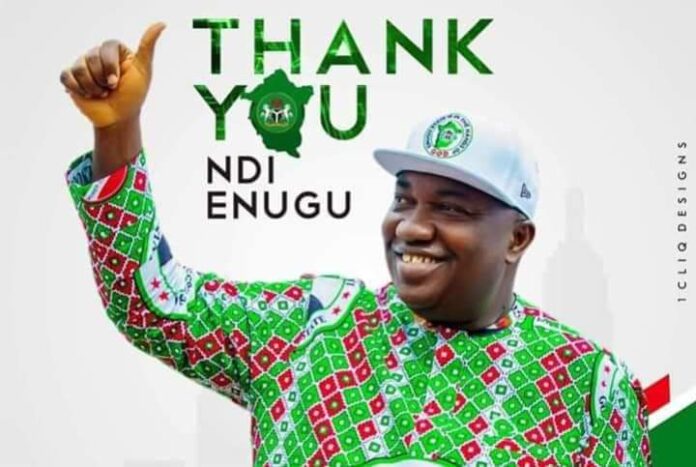 …As Assembly member calls for caution

Following a rave of false report that the governor of Enugu state, Rt. Hon. Ifeanyi Uguwanyi had hosted a lavish birthday party amidst the Covid-19 pandemic, a Member of Enugu state house of assembly, Rt. Hon. Chima Obieze has dismissed such report as false

In terse statement he titled; SETTING THE RECORD STRAIGHT, Rt. Hon. Obieze stated that there was no party nor was there any plan by the Governor to host a group event to celebrate His birthday

According to Obieze; “the gathering was a meeting of the State committee charged with finding solutions to the health crises and the meeting coincided with the birthday of the Governor.”

“A cake was presented to the Governor as a surprise gift just immediately after the meeting which was chaired by His Excellency.”

Hon. Obieze urged the general public to disregard the rumor as the governor is focused on finding ways to prevent the virus from spreading to Enugu state.

READ ALSO  Asaba Accord: Those against Southern govs are on expired drugs – Aisha Yesufu

“My attention has been drawn to the attempt by  some mischief makers trying so hard to spine a video recorded and shared by me to wish the Governor of Enugu State a happy Birthday to suit their not only biased but premeditated evil intentions. The true situation is that the video was recorded after an emergency meeting of all political office holders in Enugu on how best to tackle the Covid-19 pandemic.

“The meeting coincided with the Governor’s birthday. While the meeting was going on, a well-wisher delivered a beautiful Lion designed cake to the Governor. The Governor almost rejected the cake on the grounds that he wanted no celebrations but some leaders at the meeting prevailed on him to accept the cake.

“After the meeting, Distinguished Sen. Ike Ekweremadu was asked by the State PDP chairman to moderate the cutting of the cake which he did.

“It is surprising to see people peddling lies and inputting falsehood into what happened that day.

“For those who watched the video, it is simple enough to see for a fact that there was no party by the Governor. There were no drinks, no food, no music nor entertainment.

“The people behind this blackmail simply wants to tarnish the image of a man who is giving his best to protect the lives, health and welfare of our people.

“I write this because I was part of the meeting and was present to see for myself that the Governor celebrated no birthday but was busy that day making calls to ensure some medical items the state had ordered to combat COVID-19 get to us timely”.

“Those behind this blackmail should desist immediately.”