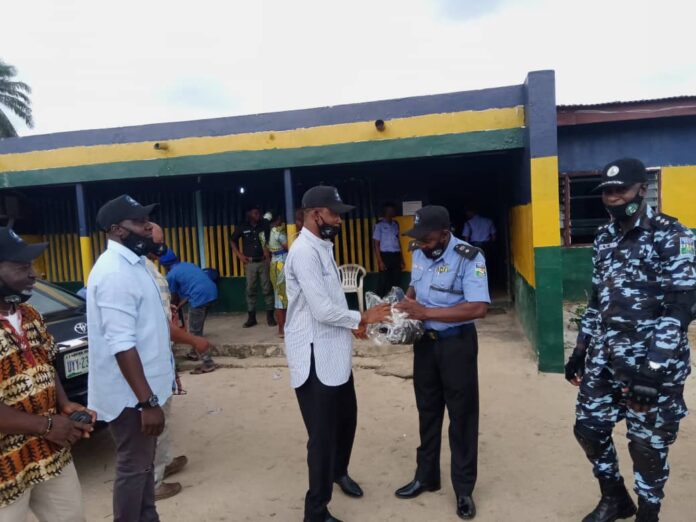 The need for stakeholders to keep maintaining the hygiene protocols as well as various precautionery measures rolled out by the World Health Organization, National Centre For Disease Control (NCDC) and the Government in order to keep staying safe cannot be overemphasized. It was on this note that the Police Campaign Against Cultism and Other Vices (POCACOV) made up of the Commander Anti Cultism Squad Elele Zone and pocacov Coordinator Rivers state Dsp Abdullahi Yusuf Idi in conjunction with Public Complaints Commission Rivers state headed by a Pocacov stakeholder and the Hon commissioner public Complaints Bureau Hon. Marshal Israel alongside other pocacov stakeholders visited Okehi in Etche Local Government Area of Rivers state on Sunday, 24th of May, 2020.

The POCACOV stakeholders team had arrived at Okehi Division of the Nigeria Police Force where they were received by the Divisonal Police Officer CSP Anthony Ofunna and where Dr Michael West of Siat Nigeria Limited who also came with the Amb Bulus Emmanuel had enlightened stakeholders at the venue on the essence of the visitation which is anchored on the observation of Hygiene Protocols and strict adherence to various precautionery measures rolled out to contain and curtail the spread of Covid 19 and the need to continue to stay safe.

READ ALSO  MUST READ: What Does The Name Nigeria Mean To You? Part 1 By Natasha Akpoti

In his Remark, the National Coordinator, Police Campaign Against Cultism and Other Vices (POCACOV) CSP Ebere Amaraizu represented by DSP Abdullahi Yusuf Idi maintained that this is part of Social Responsibility/Community Outreach Programme of Pocacov with its relevant stakeholders to enlighten communities on issues affecting them in line with the actualization of goal 11 (SUSTAINABLE CITIES AND COMMUNITIES) of the Sustainable Development Goals (SDGs) to transform our world.

He finally thanked Hon Marshal Israel the Hon Commissioner Public Complaint Commission Rivers State who also is a POCACOV statkeholder and other stakeholders present for their support and partnership which brought about the success of the programme.

Adding his voice, Hon. Commissioner Marshal Isreal thanked the Inspector General Of Police IGP Mohammed Abubakar Adamu for POCACOV which he described as a veritable grass root programme which will stand the taste of time owing to its community structure to involve different stakeholders.

He also thanked Dr West for his medical lectures and tips and finally thanked the Divisional Police officer Okehi CSP Anthony Ofunna for the reception and the mobilization of his community.

Highlight of the outreach was the formal handing over of POCACOV Customized Facemasks and Customized Face caps for POCACOV campaign outreach to the Divisional Police Officer who thanked the team for the visit and choice of his area of responsibility for the outreach.

In a related development, about 40 customized face mask were handed over to the Police Public Relations Officer of Imo state SP Orlando Ikeokwu by the Pocacov Ambassador Kingsley Egbuna also known as Didi Nnamen who also is the General Manager Hot Fm Owerri to aid personnel in the discharge of their duties during this COVID-19 era.

Receiving the POCACOV Face Masks on behalf of the commissioner of police Imo state from the Pocacov Ambassador, the Police Public Relations Officer thanked the Ambassador and appreciated POCACOV programme.