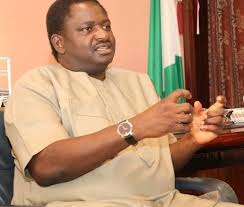 The Arewa Youth Consultative Forum (AYCF) has warned the Special Assistant on Media and Publicity to President Muhammadu Buhari, Mr. Femi Adesina, over the use of derogatory language and highly-disrespectful words against the respected Northern elder, Professor Ango Abdullahi for conveying the true feelings of millions of Northerners.

The group in a press statement issued and signed by its National President, Alhaji Yarima Shettima and obtained by Journalist101, have described Mr. Adesina’s comment as lacking the right choice of words.

You would recall that Professor Ango Abdullahi, had recently issued a statement on behalf of the Northern Elders Consultative Forum (NECF), discrediting the administration of President Muhammadu Buhari. That the administration lack the required capacity in addressing the emanating security challenges ravaging the Northern parts of the country.

In his response, Mr. Femi Adesina, said, Professor Ango Abdullahi is only speaking of himself but not for the majority of the Northerners.

However, AYCF, advised Mr. Adesina to restrain self from using abusive words against their elders.

” Our attention has been drawn to the use of highly-disrespectful words by President Buhari’s spokesman, Femi Adesina against our respected elder – Professor Ango Abdullahi for conveying the true feelings of millions of Northerners.

“For the widely-publicised unguarded outbursts of Femi Adesina, we as youth from the North would like to declare as follows;

“That Femi Adesina has insulted the North and we take exception to his choice of words, which we believe he would never use against elders from Yoruba land for whatever reason. We demand the withdrawal of the abusive language he deployed against Professor Ango Abdullahi and other respected elders in NEF.

“We find it even scandalous that a Presidential Spokesman lacks the right choice of words to use in dodging the reality of today’s Nigeria, in which the North is worse off.

“We would like to let Adesina know that no one has the monopoly of derogatory words and the insults against the North must be stopped at once.

“While we stress that we would not take this kind of infantile attack on our elders, we wish to call in all Northerners of good conscience to ignore Adesina’s unguarded outburst against Prof Ango and NEF. Enough of this nonsense please”, the statement said.