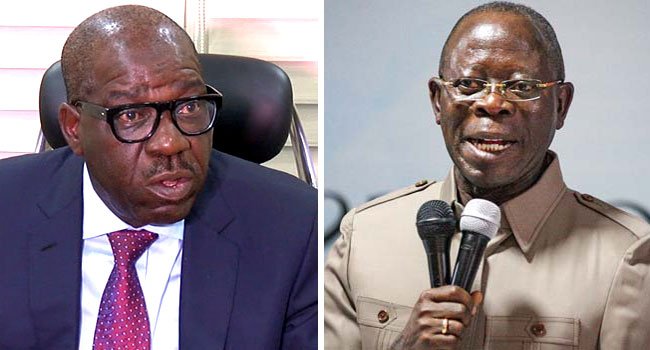 President Buhari in trying to be fair to all tried reaching out to both parties to seek for a way to resolve the impasse between the godfather and his godson as it relates to Edo state, Femi Adesina has disclosed.

The presidential spokesperson also revealed that President Muhammadu Buhari has been making attempts at reconciling Governor Godwin Obaseki of Edo State, and his predecessor and estranged mentor, Adams Oshiomhole for the past one year after which he allowed the cul-de-sac.

Adesina made these revelations in a Facebook interview with a Nigerian, Ata Ikiddeh, based in the UK.

“What he has done is to meet with the parties separately. And he has been doing this for more than a year since the crisis in Edo began.

“So, if the people are in entrenched positions and refuse to shift ground, what would the President do as a democrat? You allow the process to run its course.

“What people expect the President to do is to legislate things, to order Obaseki ‘No, step down’ or order Oshiomhole ‘No, give him the ticket’.

“That is not democracy. When you begin to order and legislate things like that you would be unfair to one party.

“But before Edo, there was Rivers, there was Zamfara and, of course, you know many other states were the governing party lost because of internal issues.

“What may not be apparent to the public is what the President did in all those states and he has done in Edo.”

Journalist101 recalls that Obaseki was disqualified by the All Progressives Congress, APC, Screening Committee from contesting the forthcoming governorship primary election of the party on Democracy Day- June 12.