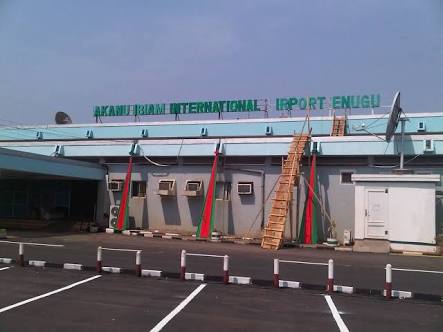 Eleven months since it was closed for traffic in August 2019 for the repair of its runways and upgrade of its facilities to meet international standards, the fate of Akanu Ibiam International Airport, Enugu, still hangs in the balance, remains uncertain.

From time to time, they keep giving us hope that the child would soon leave the incubator, that the Enugu airport would soon be reopened. We keep on waiting.

When they closed the airport in August last year, they raised a number of issues, in particular, the dangers posed by the  existence of a communication mast and a market near the airport, which they claimed was disrupting flight operations, and insisted that Enugu State Government must relocate both the mast and the market to make flight operations at the airport safe. Without much ado, the Enugu State Government promptly complied with these demands and relocated them.

READ ALSO  Musiliu Smith: Round Peg in a Round Hole By Hon Chinwe Ugwu

Initially, when they closed the airport, they told us that it would be reopened both for local and international flights before Christmas 2019. But at that time, not even a dime was approved for the renovation of the airport.

It was much later, following a lot of concerns, that President Muhammadu Buhari approved the release of N10 billion for the rebuilding of the airport. We were overjoyed and hailed him. That was when repair work at the airport actually started.

As the Christmas 2019 reopening date of the airport approached and nothing tangible was on the ground, the Minister of Aviation, Hadi Sirika, came out to apologise that reconstruction work was affected by late release of funds, and assured that nothing would hinder the conclusion of work and reopening of the airport before Easter 2020. We agreed with him.

At the same time, he complained that the construction company handling the repair work had abandoned work due to coronavirus, after materials and funding had been provided, thus forcing the Federal Government to suspend its reopening. We became confused.

All the same, it was reported that construction work at the airport  resumed since last May, while workers of the PW Construction Company laying the Fiberglass and Binder Course on the regulated asphalt runway, were sighted working at the site. It revived our hope.

But now that the federal government has given approval for the resumption of domestic flights nationwide, following the easing of the lockdown occasioned by coronavirus pandemic, we did not hear that the Akanu Ibiam International Airport, Enugu, would be among the airports where flights operations would resume.

In other words, the Honourable Aviation Minister has not told us that work at the  Enugu Airport had been completed and that flight operations would now resume there. At least, we would have been celebrating and clicking glasses.

May be, we would have to wait for the closure of the airport to clock one full calendar year before it would be reopened. That’s how we would know that we have a government that looks after our welfare, that actually cares too much for us.

READ ALSO  Behold, our president's house is on fire! By Dr Dons Eze

But let us not forget that since that eleven months that the airport was in incubator, there are hundreds, if not thousands of people, whose stomachs were aching, those who had depended on the airport for their daily bread.