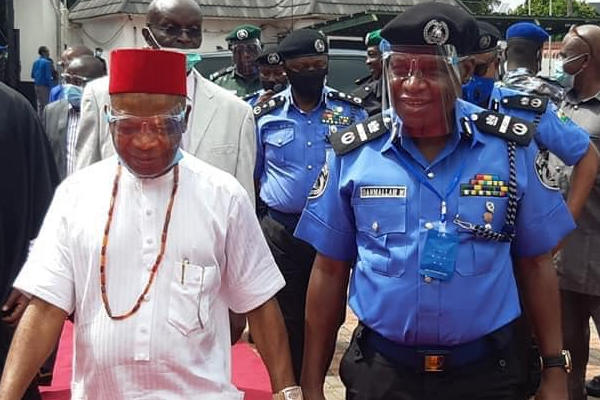 Recently a well known Igbo personality, Prince Arthur Eze, according to reports, facilitated the establishment of Zone13 of the Nigerian police force headquarters in his hometown in Anambra state.

This has raised so many questions in the minds of many Igbo Patriots who questions the rationale behind it in Igbo land that enjoys relative peace except for  fulani herdsmen and other criminal elements from the north who have been migrating to Igbo land of late and committing various degrees of crimes.

Igbo land is more peaceful than many parts of the country, hence, the establishment and building of police stations to fight imaginary crimes instead of building industries and economic viable infrastructures that would employ our teeming youths is a misplaced priority by the initiators.

This is the same way hundreds of road blocks are mounted all over Igbo land by various security agencies instead of the North where insecurity is the order of the day.

We all know that one of the major cause of insecurity and youths restiveness is unemployment. This can be seen from what is happening in the northern part of the country where unemployed youths have found negative solace in all forms of criminalities, such as cattle rustling, kidnapping, banditry, rape and being willing tools in the hands of Boko Haram and other deadly insurgency groups.
Even though the top positions in the hierarchy of the Nigerian Army, Police, DSS, SSS, NIA and other security outfits are headed by people from the north, that have not prevented the upsurge of insecurity in northern states, and so, what justification do anyone have to convince me that the building of more police stations in Igbo land is for the purpose of crimes and insecurity, other than laying further siege to compliment the road blocks in every corner of Igbo land?

Unarguably, the solution to the perennial and nightmarish insecurity situation both in the north or elsewhere, is to build industries and other economic viable infrastructures to employ the millions of jobless youths in the country, a move only visible in the north as the present adminstration is investing billions of dollars to build infrastructures in northern states of the country.  These projects when finished will no doubt ameliorate the unemployment rate and insecurity in northern Nigeria and beyond.

Relatively, instead of building police stations, many Igbos would’ve appreciated it more if Prince Arthur Eze had facilitated the establishment of an industry or any other viable economic development infrastructures like world class equiped skill acquisition centres in each of the five states in Igbo land to empower millions of Igbo youths who resort to drug trafficking, kidnapping, armed robbery, internet fraud etc, as a result of frustration and a blink future caused by unemployment.

Arthur Eze has what it takes to build industries in Igbo land or better still, build refinery or gas stations in every community in Anambra state and employ Anambra youths and other youths in Igbo land hence, he’s into oil and gas business. Why building police station instead of building what is connected to his line of business to benefit our people economically?

If he was looking for what to build for Igbo people and have none in mind, he would’ve seeked for advice on what would benefit the people instead of imposing a police zonal headquarters on them.

We all have seen the milestone the likes of Innoson, Ibeto, Coscharis and other indutrialists of Igbo extraction have made and how their huge investments in Igbo land is reducing unemployment and curtailing insecurity in Igbo land. This is commendable and what our people want and not police stations, as if the only thing happening in Igbo land is crime.

There are many salient reasons why Arthur Eze’s achievement of attracting a police station in Igbo land and the fanfare that accompanied it’s establishment should not be celebrated as a milestone.

First, the top police personnels that would head the police zone13 will still be from the north, where they were not able to stop the raging insecurity.

Secondly, fulani herdsmen and other criminal elements who usually take advantage of their tribesmen in top positions in Nigerian security outfits to penetrate into all corners of the country and perpetuate crimes because they have top people who will defend, bail or stand for them when they commit security breaches will use this opportunity to flock into Igbo land. If that is not the case, how many bandits and herdsmen have been jailed for such crimes?

Going by what is happening.in the country, what assurance can Prince Arthur Eze give to Igbos that the newly established zone13 will not aid the infiltration of herdsmen and other criminal elements from the north who will take the advantage that their brothers are heading the zone13, to penetrate into every nook and crannies of Igbo land to perpetuate their criminal activities?

Thirdly, many Igbos have faulted the timing of the establishment of the police zone13 headquarters at a period when Prince Arthur Eze’s town is in serious land tussles with all the neighbouring towns bordering his town Ukpo. Many view the timing as a move to instill fear and intimidate these towns with the presence of the police zone13 headquarters which will be in his payroll.

However, whatever the reasons for building police stations instead of building industry are, one thing is very obvious, he didn’t compare the short and long term benefits of building a police zonal headquarters and building industries and other economic viable infrastructures that would benefit and empower millions of Igbo youths economically and reduce insecurity in Igbo land.

Conclusively, the siting of the zone13 headquarters of the police facilitated by Prince Arthur Eze, was in its entirety a misplaced priority.