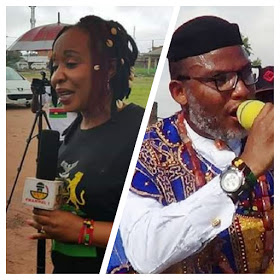 The directionlessness of Nnamdi Kanu in his quest to restore Biafra is manifested daily by the 360 U-turn in his methodology.

In 2013,  after Nnamdi Kanu successfully dislodged the original initiators of the word Indigenous People of Biafra (IPOB) using the media (Radio Biafra) which was handed over to him as the Director to thoroughly blackmail them, he (Kanu) said he doesn’t want Biafra that is gotten by the drinking of tea that he must go to war and fight like a man.

This led to the numerous contributions with different code names for the defence of the Biafra territory. Till date, he has failed to account for the millions of dollars contributed for that purpose after he made himself “Supreme Leader” of his private company; IPOB and the insecurity in the Old eastern region is in the all time highest level.

After his sojourn to Kuje prison in 2017, like a chameleon, Mr Kanu said he now want referendum and the word “No Referendum no Biafra” saturated the airways. This is in total disagreement with his earlier position of going to war to get Biafra.

Like a paid agent, Kanu sustained this deceitful campaign and made a lot of our young people that are legitimately tired of the system not to obtain their Permanent Voters Card, PVC.

Like the proverbial “only I as king will stand up” Nnamdi Kanu attempted to blackmail, hurled insults on the leaders of the political arm of the struggle for Biafra (Movement Of Biafrans In Nigeria, MOBIN) which was birthed while he was in prison. He said Biafra can never be achieved by politics and called anyone preaching that a liar.

While MOBIN, led by its Chairman, Barrister Emeka Emekesiri and Director General, Comrade Rita Anigbogu canvassed for Biafrans to join Nigerian politics, run for offices and take over all the political offices in Biafran territory, Kanu’s IPOB labeled MOBIN betrayers and even directed his foots soldiers to attack MOBIN directors and officers campaigning for political struggle in Nigeria.

Kanu on two different occasions during the buildup to Anambra governorship election in 2017 agreed that the MOBIN’s methodology was better and promised that his group will get involved in the Anambra 2017 governorship polls.

One of the meetings was organized by AlaIgbo Development Foundation (ADF), in Enugu, while the second  one was organized by the Supreme Council of Elders of the Indigenous People of Biafra, and hosted by late Dr Dozie Ikedife at his Nnewi country home.

However in a very recent online discussion panel, monitored by MOBIN MEDIA, Uche Mefor Nnamdi Kanu’s deputy was seen on video saying that their IPOB would now begin to participate in politics, and using the exact words of MOBIN, he shamelessly said that they want to take “control of the Biafran territory politically”.

This is the third time, Kanu and his team will do a total turn around in their choice of methodology.

Mefor in the video broadcast, said, “IPOB is doing everything humanely possible to make sure go back to the original stage whence we started. We are trying to identify who are our brothers, who are our sisters, who are our neighbors. This is something Nigeria has carefully through their agents over the years destroyed and put confusion into us. But we are not going to allow that confusion to be sustained…

“There is the third one which is effective government. We must have a government we call the government of Biafra. The indigenous people of Biafra should be in control of decision making in Biafraland. Whether we like it or not. The reason why we decided and meticulously deviate from the temptation of going into Nigerian politics is because if we do that, we will be destroyed forever. They set a trap for us. The system is corrupt, the system is not working ad you can see, your vote des not count, they buy off votes, even the supreme Court of Nigeria is now at the centre of deciding elections.

“Your so-called PVC does not count. We refuse to be driven into darkness but we are not going to allow ourselves to be on that particular mindset for a long time. Nigerian political system is a very devilish one, they Apply gutter methodology.

“They are telling us, let them be taking while we are taking decision about what is going on in their own land. This we have studied, and going forward, we are going to descend on every evil legislation in Biafraland and destroy it, and the people of Biafra will take over the control of their territory.

“We are not going to back away from the civil disobedience method. At the same time, we are not going to leave the political offices especially those in Biafraland. I am talking about Biafran territory. The policies. The political decisions been taken must be a reflection of the wishes of the people of Biafra.

“We have the capacity, we have the number, we are telling them ahead of time”, he stated.