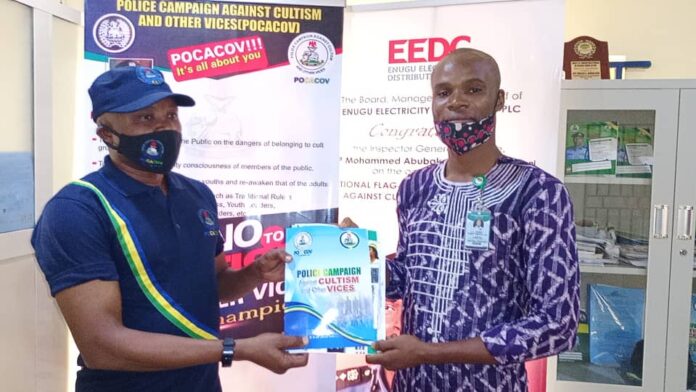 Association of Southern Nigeria Student (ASONIS) a Student body covering South East, South South and South West part of Nigeria have identified with the Police Campaign Against Cultism and Other Vices(POCACOV) as a veritable partner in the ongoing campaign against cultism, Sexual and Gender Based Violence, substance abuse, thuggery, violence as well as other vices.

In his speech during the visit of the group executives to the IGP M.A Adamu POCACOV Resource Centre Enugu on courtesy visit, the National President of the student body, Comrade Edeh Elija Chinedu maintained that they have come to identify with POCACOV in the ongoing campaign and to present themselves as veritable partners because POCACOV revolves around Nigerian children and Youths and their future.

“We are here to commend the Inspector General of police IGP M.A Adamu and the entire Nigeria Police Force for this wonderful initiative which is youth friendly and parked with message of hope and that which saves Nigerian Children and Youths from the Claws of Cultism and Other Vices.

“We also commend the National Coordinator, POCACOV on how he has been handling the Campaign drive and hereby wish to submit ourselves as veritable partner for POCACOV and assure that our organization which covers South East, South South and South West (SOUTHERN NIGERIA) is now part and parcel of POCACOV and will now join in the advocacy, awareness creation/sensitization, mentoring and re-orientation activities of POCACOV in various campuses.

They also noted that they have earlier joined in the sensitization on suicide and other crime prevention activities.

Responding, the National Coordinator POCACOV, CSP Ebere Amaraizu thanked the student body on the bold step taken and assured that; “POCACOV will continue to work with different stakeholders in the country to raise the awareness, advocate, mentor, sensitize and reorientate Nigerian Children and Youths on the dangers inherent in Cultism and other vices with a view to discouraging them from them for a safe and secured society.

“We are also as a campaign body galvanizing stakeholders support to aid in getting to the root of the cultism and other crime and resolving them using community oriented policing approaches.

Highlight of the visit was the formal unveiling of the student National president as a POCACOV stakeholder and handing him with POCACOV Campaign stickers, fliers, magazines amongst others.