Why is Nigeria so unlucky? A country of over 200 million people and with thousands of intellectual giants, always led, or perhaps, hoping to be led by people with half-baked education, people who hardly could critically analyze issues before disgorging them to the public for consumption.

Plato said the reason why a good man should be involved in politics is to prevent bad men, people with low intellectual capacity, from presiding over his affairs. But in Nigeria, people with such high intellect, hardly had the opportunity to govern the country, which is unfortunate.

Since independence over six decades ago, Nigeria was ruled by only two university graduates, which perhaps, is the reason why the country has not been able to find its way. These were Umaru Yar’Adua and Goodluck Jonathan. Even though that the regimes of these two men may not be said to be exceptionally wonderful, but at least, you hardly could fault their mental alertness, as they had hardly goofed.

Now, Bola Ahmed Tinubu, former Governor of Lagos State, and presently National Leader of the All Progressives Congress (APC), who is rumoured to be eyeing the Aso Rock Presidential Villa, has begun his own goofs and retractions.

At a colloquium to mark his 69th birthday anniversary held in Kano, Tinubu told the Federal Government to recruit 50 million youths into the Nigerian Army in a bid to oust insurgents and miscreants threatening the nation’s peace, as well as to create employment for unemployment youths in the country.

According to him, “the insurgents and bandits are taking advantage of the high unemployment in the country and are recruiting the youths to indulge in their criminal activities”.

Tinubu believed that Nigeria was under-policed, adding that drafting the youth into various national security agencies should not be based solely on educational qualification or literacy. “We are under-policed and we are competing with armed robbers and bandits to recruit from the youths who are unemployed —33 per cent unemployed”, he said.

Two days later, Tinubu made a U-Turn. He said that he committed an “accidental verbal mistake” when he asked the Federal Government to recruit 50 million youths into the Nigerian Army in a bid to oust the insurgents and miscreants threatening the nation’s peace.

In a statement issued by his media office, Tinubu said he meant 50 thousand youths and not 50 million youths, which is about a quarter of Nigeria’s population.

But for how long will our leaders continue to take us for a ride? They will say one thing today, but when they realize its grave implications, they will quickly deny it, and very often, blame it on the press, which they will say, misquoted them, or that they were quoted out of context.

READ ALSO  [Opinion] Why not Tambuwal by Offor Honest

Good enough, Bola Tinubu, this time around, had spared the press from his gaffe. He admitted that he was the one who misquoted himself. He however did not personally come out to make the denial, but used his media office to do that.

We wonder why Bola Tinubu would not know the difference between 50 thousand and 50 million. He did not even mention 500 thousand, but 50 million. But as they say, out of the abundance of the heart, the mouth speaketh. It give us a glimpse of Bola Tinubu’s thought pattern, where he is headed to, and how his mind has been working.

Now, Bola Tinubu wants 50 million of our youths to be recruited into the Nigerian Army, in a country with a population of about 200 million people. Perhaps, it may be necessary to remind Tinubu that nations no longer go for large armies. It is technology that wins the war. That is why is Israel with 2.29 million people and with an army of 165,000, was able to face the entire Arab countries.

But if it is on the basis of banditry being more attractive to the youths that Bola Tinubu had suggested the recruitment of 50 million youths into the Army, then, there must be something fundamentally wrong with the system. Perhaps, Bola Tinubu had not heard about the reported fleeing of soldiers from the war fronts. So, if we could not keep what we have, why canvass for new recruitments?

Again, if Bola Tinubu actually meant 50 thousand youths that should be recruited into the military as panacea for “massive unemployment” in the country, then he had said nothing, because even President Buhari claims to be recruiting 50 thousand youths every year for his N-Power programme. In other words, there was nothing novel in Bola Tinubu’s Kano Colloquium.

All the same, if Bola Tinubu is actually eyeing the Presidency in 2023, he should try to put his house in order, rather, put his mouth in order, and not say one thing today, tomorrow he begins to say a different thing, to eat his words. 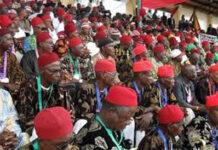 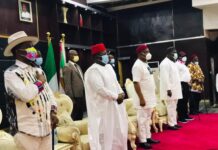 Ebubeagu: A fearsome leopard or a frightened cat? – Joel Nwokeoma

POCACOV: The Challenge of Piracy in Our Waterways