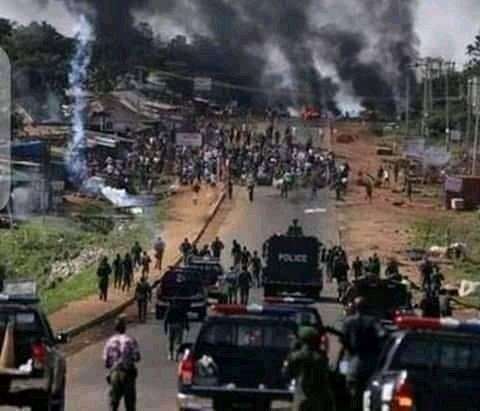 Military fighter aircraft, Nigerian Army and police personnel are currently in the Essien Udim Local Government Area of Akwa Ibom State, in an operation to flush out unknown gunmen suspected to be responsible for the death of security agents in the area.

A report by SaharaReporters said that there are ongoing gunshots and tension in the LGA as residents report attack helicopters hovering round their locations in obvious search of the unknown gunmen alleged to be members of Eastern Security Network, ESN.

Residents said that the gunshots have been continuous leading to palpable tension in the LGA as some of them had not been able to go about their normal business since morning.

“The gunshots keep reverberating. Military and police personnel are trooping in large numbers and surveillance helicopters are flying in the air. I am still in my bedroom,” Sahara Reporters said.

Odiko Ogbeche-Macdonald, the police spokesperson in the state who confirmed the development to TheCable, said “it’s a joint operation to flush out the criminals.”

He added that the public will be notified whenever arrests are made.

The operation follows a series of attacks by gunmen, especially on security personnel in the area.

In March, three police officers, including their commander, were killed in a violent clash with suspected hoodlums in the LGA.

Ben Ajide, a chief superintendent of police (CSP) and commander of the quick intervention unit of the command in Akwa Ibom, as well as two other officers, were killed in the attack.

In another attack on March 1, gunmen burnt down a divisional police station in Essien Udim LGA.

The gunmen also killed a yet-to-be-ascertained number of military officers while many others were injured.

Essien Udem is the local government of the Minister of Niger Delta, Godswill Akpabio.