Chief Iwuanyanwu declared his support for the epoch making event on Saturday, 11th September, when the convener of the debate, Hon. Monday Diamond Ani led some members of the local organising committee on a Courtesy visit the him.

Chief Iwuanyanwu who’s the the founder of Iwuanyanwu Int’l FC and the Chief Executive Officer of Champion Newspaper (Daily Champion) welcomed the members of the LOC with gladness and extolled the concept South East Debate 2021 while commending the Convener of the event for such laudable Initiative.

The Politician, Businessman and Former Presidential Aspirant seized the opportunity to appreciate Enugu State Governor, His Excellency Rt Hon. Dr. Ifeanyi Ugwuanyi immensely for his style of leadership and also expressed gratitude to him for celebrating him during his 79th Birthday, especially, the State birthday wish, which he said “demonstrates the love and respect the Governor has for Igbo Elders.”

Comrade Ani who’s also the Special Assistant to the Governor of Enugu State on Culture and Tourism, in his remark, said the debate has become necessary as we need to start engaging ourselves as Ndigbo to be able to make informed decisions on national issues and not speak from the point of emotions. 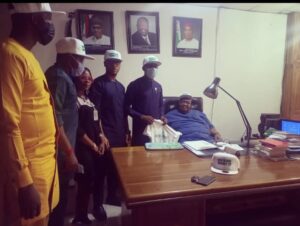 The SOUTH EAST DEBATE’21 which centres its topic on RESTRUCTURING; Panacea to National Unity, Peace and Progress….? will hold on October 20,2012 in Enugu State,with a 30-minute Panel Session and an online Essay Competition.