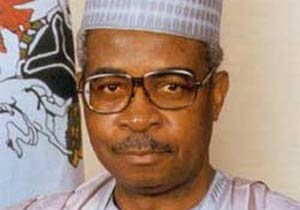 Information reaching 247ureports.com reveals that the troubles bedeviling the Buhari administration towards battling the increasing insecurity across the country may have suffered another major setback. This is as the Chairman of the Presidential Committee on the North-East Initiative [PCNI], Lt. Gen T. Y. Danjuma [RTD] GCON abruptly resigned his post. [PINE = Presidential Initiative for the North East]

This action considered an embarrassment to the Buhari regime.

The Presidential Committee on the North East Initiative – PCNI was established by President Muhammadu Buhari to serve as the primary national strategy, coordination and advisory body for all humanitarian interventions, transformational and developmental efforts in the North-East region of Nigeria. But the PCNI has had its share of troubles. It suffered undue corruption by its handlers. The former Secretary to the Government of the Federation [SGF], Babachir Lawal was sacked owing to sharp practices relating to the Initiative.

T. Y. Danjuma had on March 24 at the convocation of Taraba State University in Jalingo expressed his displeasure with the security forces and the infestation of aided killings across the country. He stated that the armed forces in Taraba and other states are colluding with killers and marauding herdsmen, and that they were not protecting the people against attacks.

In his words, “You must rise to protect yourselves from these people; if you depend on the armed forces to protect you, you will all die. I ask all of you to be on the alert and defend your country, defend your state”. He continued to add that the killings were akin to “an act of ethnic cleansing” being perpetuated against the people of Taraba, specifically, and Nigeria, at large.

“This ethnic cleansing must stop in Taraba, and it must stop in Nigeria. These killers have been protected by the military; they cover them and you must be watchful to guide and protect yourselves because you have no other place to go.”

Following Danjuma’s call, apologists of the Buhari administration took to verbal arms against the former Lt. Gen. Some of the official responses tagged Danjuma’s call, a call for anarchy. This was while a majority of the populace hailed Danjuma’s pronunciation as timely and potentially, lifesaving pronouncement.

Roughly sixteen days [16] after Danjuma’s public commentary on his observed misnomer – along with the military’s attempt at discrediting Danjuma, the military finally decided to act on Danjuma’s allegations. The Buratai led military constituted a 10-mn panel to investigation the allegations.

The 10-man committee may have come to formation in response to the resignation of Danjuma.