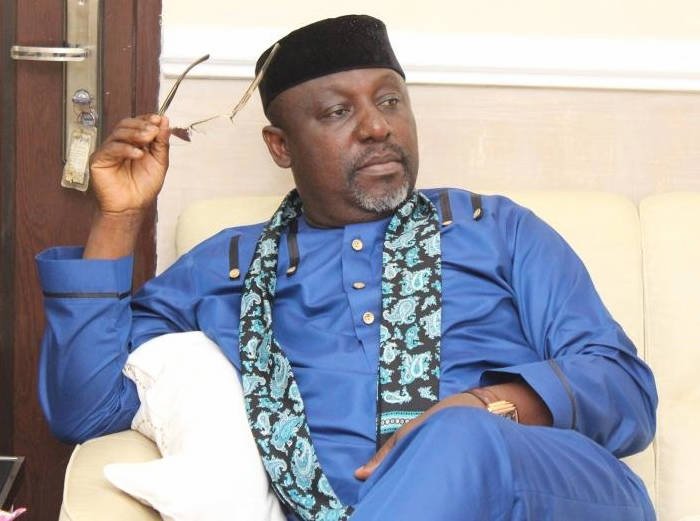 Rochas Okorocha had responded to his purported suspension from the All Progressive Congress, APC. He maintained that he is still the leader of the party in the south east and there is no division in the party in Imo state.

“there is only one APC in the state with Daniel Nwafor as the chairman and Owelle Rochas Okorocha as the leader. Any other group claiming to be a faction of Imo APC must obviously be a gang of 419ers or league of fraudsters who are experts in issuance of dud cheques and collecting billions for jobs not done.”

Okorocha maintained that he has no problem with the National Chairman of the Party, Comr. Adams Oshiomole but rather dissatisfied with the role he plaid in the primaries of the party to chose her Guber candidate.

He accused the National Chairman of  imposing a fellow with a questionable character as the governorship candidate of the party in the state.

“The only contentious issue in Imo APC is that the National Chairman of the party, Mr. Adams Oshiomhole, imposed a known PDP member and a known character in the state on the party as its governorship candidate, and by so doing, pushing the party and its members to a very tight corner, especially when it comes to the issue of marketing a candidate.

“If Mr Oshiomhole didn’t want the preferred candidate of members of the party in the state, Uche Nwosu, for any reason, and if he actually meant well for Imo APC, he would have taken one of the guber aspirants that formed the coalition who are known members of the party, and who is also from Owerri zone since that was the reason some of them in the coalition claimed made them to leave the government.

“But the APC national chairman preferred a PDP man and also from Orlu zone. And he imposed the candidate on the party and at a time the man was facing charges on corruption. That is the problem with Imo APC and its guber candidate.”

READ ALSO  Position Of S'East National Assembly Caucus On Exclusion of The Zone In $22.7bn Loan