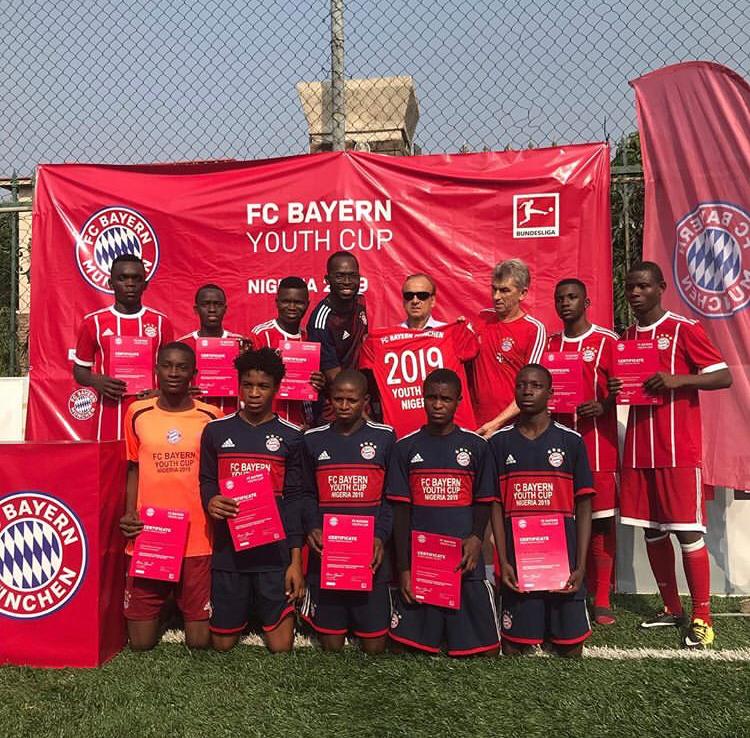 Organizers of the prestigious FC Bayern Youth Cup Nigeria tournament, says it is targeting about 10,000 participants across Nigeria in  the 2020 edition.

Director and VOE Foundation representative in Nigeria, Mr. Victor Edeh disclosed this Monday via a statement he made available to Sports writers in Enugu, south -East Nigeria.

According to him, “Nigerian leg of the second year of the Youth Cup has been concluded and we witnessed some beautiful stories, and  the team selected this year is very balanced and we look forward to a successful outing in Germany.

Recalled that 4 unreplied goals from Kano Stars FC, “saw them defeat  Oasis FC of Lagos in the finals of the 2019 FC Bayern Youth Cup Nigeria to lift the trophy.

“The project is growing and we plan to grow it even bigger with a target to reach 10,000 participants across Nigeria for the 2020 edition. The team selected this year is very balanced and we look forward to a successful outing in Germany” Edeh stated.

The statement further  hinted that a total of ten players were selected from the different teams who participated in the national finals. “Team Nigeria will be invited to camp at the start of May in preparations for the world finals” adding that this is the second year Nigeria will be sending a team to the world finals in Germany.

“As you may be aware, the national finals recently took place at the Meadowhall school in Lekki, with over a thousand people in attendance to see the youngsters compete, and also to get a photo with the Bundesliga trophy that was on display.

Speaking about  his second visit to Nigeria, the statement quoted  Augenthaler as saying, “I visited the national stadium in Abuja last year and here in Lagos this week, both are big facilities that have to be maintained properly to help develop Nigerian players. There is a lot of talent in Nigeria and I hope that we have selected a good Nigerian team that will do well in Germany”

In his remarks at the colourful event, Edeg quoted  Super Eagles  chief coach, Gernot Rohr as saying , “the tournament is a good opportunity for young players to be seen and further developed. The U-17 national coach will definitely be keeping an eye on the performance of the players at the world finals to see who can help his team”

“Activities for the National Finals included a training session where all the participants had a chance to train with the Bayern Club legend, media sessions with SuperSports, Deutsche Welle, Elegbete TV and BBC, office visit of Allianz (FC Bayern Global partners) and a visit to the Lagos state FA Chairman.