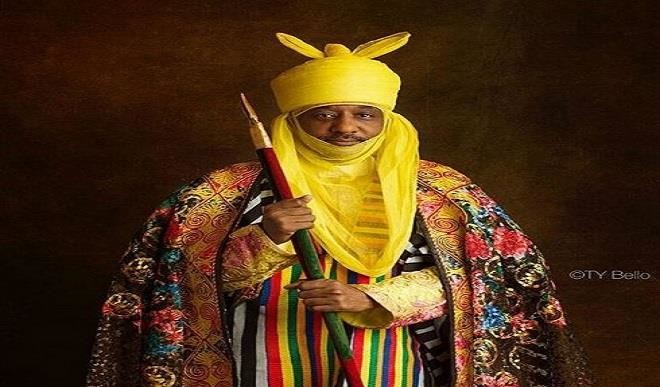 A tense atmosphere on Sunday enveloped the northern Nigerian city of Kano, as supporters of Emir Lamido Sanusi trooped to the airport to welcome their beleaguered traditional ruler.

Hundreds of Kano residents matched towards the airport on Sunday afternoon in a solidarity demonstration for Mr Sanusi, whose emirate was divided into five by the state government during the week.

Rumours have also spread that supporters of Mr Sanusi were bracing for a clash with pro-government sympathisers in downtown Kano. The police have also been accused of attempting to prevent a large crowd from receiving the former governor of Central Bank.

The police commissioner, Mohammed Wakili, told PREMIUM TIMES he did not order a restriction on protesters, so long as they conduct their activities peacefully.

Governor Abdullahi Ganduje on Wednesday signed an amendment to the state’s traditional ruler and chieftaincy laws. The amendment established an additional four emirates to the ancient Kano Emirate.

The law has been widely deemed controversial, amidst insinuations Mr Ganduje initiated it to settle scores with Mr Sanusi in an alleged feud between both of them.

The governor denied all allegations of vindictiveness, saying he took the steps to streamline traditional roles and make them more efficient.

On Friday, the Kano State High Court granted a temporary order for the suspension of the law, following complaints from Peoples Democratic Party lawmakers that the House of Assembly shunned extant parliamentary procedures to ram the bill through.

Mr Ganduje dismissed the court order as belated, saying he had already announced emirs for the newly-created units before learning of the pronouncement shortly after PREMIUM TIMES broke the news Friday.

Mr Sanusi left for England days before his domain was broken up, and did not witness the drama that preceded or followed it. He returned on Saturday night, but flew into Abuja and not directly to Kano.

He is, however, expected to arrive Kano by 4:15 p.m., according to palace sources. His return has been widely anticipated amongst Kano residents, especially those in disagreement with the state government’s move.

“Hundreds of people are trooping to the airport now,” Sani Sadiq, a top Kano politician with close ties to the palace, told PREMIUM TIMES on Sunday. “We are expecting our emir to arrive and we are very happy about it.”

Mr Sadiq said there would be a jubilation procession from the airport to the palace once the emir touched town.

It was not immediately clear how Mr Sanusi would respond to what transpired while he was away. He has been largely mum about the issue. Reports that the court order was obtained by his proxies were stridently denied to PREMIUM TIMES by the Kano PDP lawmakers.

“We are only against the illegal acts that were perpetrated in pushing the law,” Minority Leader Rabiu Gwarzo told PREMIUM TIMES on Sunday, emphasising a position he had previously enunciated to this newspaper on Friday.