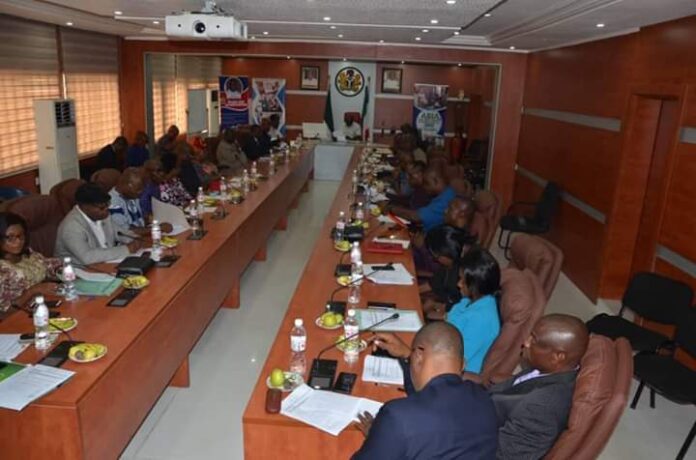 Today, Monday, 20th May, 2019, the Executive Council (EXCO) of Abia State Government met on under the Chairmanship of Governor Okezie Ikpeazu, to deliberate on important State issues.

During the Exco meeting resolved the following;

1. To prioritize the completion of ongoing projects embarked upon by the administration. Greater focus will be on education, road infrastructure, agriculture, job creation, health and security

2. Directed the expedition of the procurement process for new Innoson brand security patrol vehicles and called on security agencies in the state to improve patrol and other necessary activities to deal with post-election security challenges.

3. The restructuring of the state civil service for optimal performance and greater efficiency.

4. Adoption the report of the internal committee that reviewed the qualifications of staff of Abia State Polytechnic, Aba, as well as the optimization of staff of the institution. Council directs the institution to proceed with implementation of the recommendations there in.

6. Recommended the recruitment of a new Chief Medical Director (CMD) for Abia State University Teaching Hospital (ABSUTH), Aba, to replace the outgoing CMD. The mandate of the incoming CMD includes growing internally generated revenue of the institution, minimize waste and grow human and material capital of the institution through innovation.

7. Recommended the reactivation of Abia State Vigilante Services with special mandate to protect educational infrastructure across the state as well as safeguard local government offices.

8. Directed the sourcing of private partners to develop the Ubani Ibeku Agro-Industrial cluster with emphasis on deployment of cassava, rice and palm processing facilities.

9. Directed further engagement with relevant stakeholders on the establishment of new GSM and computer dealers mall in Aba.

10. Directed the ministries of youth development and women affairs to collaborate with the ministry of land to ensure early development of new amusement parks at Umuahia and Aba for Abia families.

The Council also received update on preparation for the second term inauguration of the Governor and his Deputy and directed the relevant committees to ensure that adequate arrangements are made to ensure a hitch-free celebration.

Exco received and accepted the interim report of the Works and Project Review Committee on designated first 100 days projects.