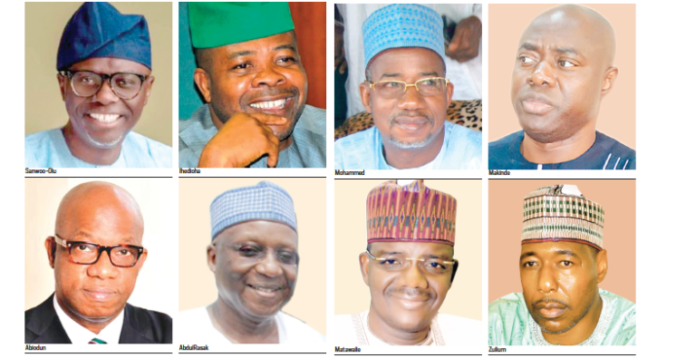 Moments after their inauguration, some newly sworn in governors have drawn the battle line with their predecessors in office, reversing policies, appointments and contracts entered into in the twilight of the last administration in their states.
The move is an indication that a number of the governors, particularly those taking over from persons who belong to a different political party other than theirs might not be favourably disposed to continuing with the old order.

In Bauchi State, Governor Bala Mohammed has declared that all appointments, promotions and transfers made from the day he was declared winner of the gubernatorial election by the Independent National Electoral Commission (INEC) are null and void.

Mohammed, who was sworn in yesterday by the Chief Justice of the state, Hajiya Rabi Umar, made this policy pronouncement while delivering his inaugural speech.

“I want to state categorically that all appointments, promotions, transfers and secondments, including those that are meant to create frictions and divisions along traditional institutions from the day I was declared the winner by INEC till date, are hereby declared null and void.

“Similarly, this directive also applies to all dubious approvals given on land allocations, sale of government vehicles and houses, as well as spurious contracts awarded in the dying minutes of the last administration.

Mohammed asked the Secretary to the Bauchi State Government (SSG) and most senior officials in the Ministries, Departments and Agencies (MDAs) to ensure strict compliance with this directive.

The governor said he would establish a high-powered committee to recover all assets and properties of the government that were illegally disposed.

Mohammed, who took the oath of office amidst cheers from his supporters, said that his administration would tackle unemployment and the challenge facing the pensioners.
Similarly, Governor Inuwa Yahaya, the newly sworn in governor of Gombe State, has suspended all appointments, contracts and allocations made by the state and local government councils as from March 10.

READ ALSO  President Buhari has declared:run or run away

Yahaya, who announced the suspension during his inaugural speech in Gombe, stressed that there were a lot of illegalities by the immediate past administration of Ibrahim Dankwambo.
He said that steps would be taken to address all illegalities, adding that perpetrators and illegal beneficiaries would be made to face the full wrath of the law.

“There were illegalities perpetrated by the immediate past administration and we will take steps to address all illegalities. Perpetrators and illegal beneficiaries will be held to account.
“In the meantime, all appointments, contracts and allocations entered into by the state government and local government councils from March 10, 2019 are hereby suspended,” he said.
Yahaya stressed that “it will no longer be business as usual,” and decried the attitude of the Dankwambo’s administration for failing to give the desired cooperation throughout the transition period.

He also decried poor state of the education sector, promising to constitute a high powered committee to review establishment of tertiary institutions in the state.

In Oyo State, Governor Oluseyi Makinde announced the immediate abolition of the compulsory N3,000 education levy being paid by public secondary school students in the state as part of his plan to ease the sufferings of parents and guardians.
Makinde also ordered the immediate opening of the overhead bridge which links the Agodi Government House with the Government Secretariat.

Ex-governor, Abiola Ajimobi, had disallowed anybody from using the bridge throughout his eight-year tenure and reserved it only for himself, his family and the deputy governor.
In the neighbouring Ogun State, Governor Dapo Abiodun has vowed to probe the alleged misappropriation of funds by the Ibikunle Amosun’s administration.

In his inaugural address at the MKO Abiola International Stadium, Abeokuta, Abiodun, who is the fifth elected governor of the state, said that he would review all ongoing projects initiated by his predecessor.

He said that in the next few days, his administration will set up an Assets and Projects Assessment Committee to review all ongoing projects and advise on their potential benefits to the state and the priority that should be attached to each project.
Abiodun said: “It is important to emphasize that this exercise is neither a witch hunt nor targeted at any administration or individual, rather it is to establish a baseline and determine priorities.

“Nonetheless, as the trustee of the people, the administration will also not hesitate to review any suspected misuse of the commonwealth and hold accountable any individual or organisation found culpable.”

On his part, Governor Emeka Ihedioha of Imo State has declared that his predecessor, Rochas Okorocha’s administration degraded most public institutions in the state.
Ihedioha stated this in his inaugural speech shortly after being sworn in by Imo Chief Judge, Justice Paschal Nnadi, at the Dan Anyiam Stadium, Owerri.

He said rebuilding the state will be a very difficult task considering the massive infrastructural decay that occurred within the last eight years.

The governor, who sympathised with the people of the state over what he described as “debased and desecrated governance,” promised to remedy the damages done by Okorocha.
He described the eight years of Okorocha’s administration as a huge setback for Imo, alleging that his predecessor disregarded the rule of law and good governance.

According to Ihedioha, Imo State government, under Okorocha, owes N57 billion pension arrears, covering over 77 months. He said Imo was financially insolvent and that it would be difficult to meet all the challenges facing the state in a short period.

His words: “The outgoing administration degraded and destroyed most of our institutions and values. The legislature, the judiciary and the civil service, all suffered grievous assaults with the House of Assembly made redundant and court orders routinely disregarded.

“But Imo State will, as always, endure. Imo will revive and prosper again. We urge you to be courageous in this conviction for we are not captives of fear.”

In a reaction, however, Chief Press Secretary to Okorocha, Mr. Sam Onwuemeodo, said that he was not surprised, as according to him, the outgoing governor left shoes that were too big for his successor to fit into. “We raised the bar and the shoes are just quite big,” he said.

READ ALSO  How i will handle the issue of Biafra - Atiku

In Zamfara State, the new administration has promised to reinstate the 1,400 workers who were sacked by the immediate past Governor Abdul’aziz Yari.

Governor Bello Matawallen announced this in Gusau, the state capital, while delivering his inaugural address.

The affected workers were recruited by the state Civil Service Commission in May 2014 and owed 60-month salaries and other entitlements before they were relieved of their appointments.
But the new governor said the workers were recruited in line with civil service rules and regulations and will be reinstated.
“We are going to set up a committee to verify them and put them into the state core civil service, except those who secured another job,” he said.

Reacting to the development, the Chairman of the 1,400 Civil Servants’ Forum, Mr. Lukman Majidadi, thanked the new governor for the move to address their problem.
“This is a welcome development and good news for us and the entire people of the state.

“Since 2014 after our recruitment, we have not received any kobo as salary from the state government, despite the fact that we were recruited by the state Civil Service Commission and posted to MDAs in the state,” he said.