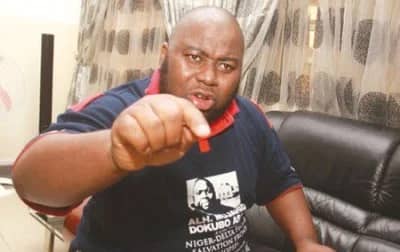 …Says we must work together with other nationalities to regain freedom

Founder of the Niger Delta Peoples’ Volunteer Force, NDPVF, and convener, Ijaw Peoples Movement, IPM, Alhaji Mujahid Dokubo-Asari, has cautioned some militants in the Niger Delta region over their recent threat to declare the Niger Delta Republic, saying they’re only out for their own selfish interest.

A group of militants identified as Niger Delta Republic Fighters, NDRF, had earlier threatened to declare the Niger Delta Republic on June 1, 2019, citing the “cruel persecution and selective maltreatment” of several Niger Delta people such as the former DSS boss, Matthew Seiyeifa, former CJN, Walter Onnoghen and others by the Nigerian government as part of reasons for the declaration.

The Niger Delta group also noted “that Nigeria has completely derailed from the path of peace, justice and progress as proclaimed by its founding fathers.”

But speaking in a live video published on Facebook, Asari-Dokubo said the militants does not have the capacity to declare independence, adding that what is needed at the time was for all ethnic nationalities in the region to join hands together to fight for their freedom.

He further cautioned NDRF to stop disgracing the people of the region with their insatiable desire of gathering crumbs from the government, saying that neither the Ijaw nor the Igbo can attain freedom on their own.

He said: “I saw a press release by a faceless group of people, claiming that on the 1st day of June, my birthday, they’re going to declare the Niger Delta Republic and I felt very bad that it’s on my birthday these idiots are going to use to dishonour our people.

“We know that you people are con men, job men and you think that Buhari is going to call or look for you when you say that and give you some money because you said you’re going to blow up some flow stations and some pipelines and destroy some oil facilities but I know that you people cannot even do it; you don’t have the capacity to do it, you’re just job men looking for small money and I know you didn’t get the money, so stop disgracing us.

“I’ve said it over and over again in all fora Izon people gathered that we cannot go it alone. We should work with other people from other nationalities. There’s nothing we can do. We should take a clue from the travails and struggles of the Doyin of the Ijaw struggle, Sir Issac Adaka Boro. He tried his best. He declared the Niger Delta Republic, but did he succeed? No! Because we were working in isolation.

“If all of us had come together to work, if Ojukwu, Adaka Boro and others had joined hands to work, Nigeria would have been history. But there are some people who do not realize this – every pocket of territory will have a strong man and every strong man will be pursuing his own agenda both positive and negative agenda, both good and evil agenda, no! It’s not going to work and that’s why I had always reached out to Uwazuruike, even to this con man that reached out to me, Nnamdi Kanu.

“I had reached out to anyone who comes up and say ‘look we’re ready to fight, to throw up the york of this evil contraption called Nigeria.’ I have always presented myself. I’m a product of this struggle, whatever I am today, I got it from this struggle. I’m not ashamed of it. I say it everywhere, I’ve never hidden it. I’ve never stolen. I’ve never used the name of the struggle to go and make any kobo but it’s a struggle that has sustained and brought me this far.

“People who knows that I’m genuine had helped, had introduced me and had encouraged my business, encourages my ideas and I’m very happy about it and I appreciate them but I’ve never stolen. That’s why nobody can arrest me. I’ve never played hanky-panky with anybody and I’ve never been a yahoo-yahoo man. I’ve never collected defense funds like some people are doing somewhere else. I’ve never asked anybody to make contributions for me in the name of the struggle but people have helped me and they continue to help me and call me.

“I’ve been abused, vilified by most of you. How much money am I being owed? As I’m talking to you, I’m being owed more than N3bn but because I don’t want to go near Buhari’s government or anything he does… people say ‘it’s your money, go and take it.’ I say how? What will I go and say before my money will be given to me? Forget about it, when the time comes, I’ll get back my money by any means necessary but I’m not going to crawl, bow and beg Buhari and his people for my money. I won’t do that.”

READ ALSO  Buhari speaks from both sides of his mouth- Obasanjo

Asari further faulted the amnesty programme granted to militants by late President Alhaji Shehu Musa Yar’dua, saying it hasn’t helped in advancing the cause of the Niger Delta liberation struggle neither has it done anybody any good rather than serving at the expense of people’s dignity.

“They should stop disgracing us. This was how all of you jumped at Yar’dua’s bribe. Yar’dua looked at you people without foundation, even in the dubious constitution of the Nigerian state and he proclaimed that he has given amnesty and you people jumped at it and when I went to court to challenge it, some of you were like, ‘Ah! This man is always on the other side.’ I don’t need to be on the popular side.

“We must come out collectively, join our hands together; the Boros, the Ojukwus, the Saro Wiwas and everybody – that’s how our freedom will come and that’s what I’ve dedicated my life for. It’s very simple. Let us take it now.

“There are 36 states, including Abuja. There are 774 local governments, there are constituted agencies that has statutory allocations in Nigeria. There is a Nigerian military, there are Nigerian foreign missions, all of them share in our resources. After they have shared all, they give us the one they think should be our own. So, if today, the Igbos, as they claim has only 5 states, joins us, we have 11 states and 11 states will share what all these states, FG, LGs and agencies has been stealing from us, there’s no way it will not be better but you people would rather go after N65,000 and you think you’re okay?

“Not everything you’ll carry job, not everything is a Cocoa farm. Freedom fighting is not a cocoa farm. Stop all these ‘We will declare Niger Delta Republic,’ let us find a way to join hands together. There’s a Lower Niger Congress which we formed, there’s the struggle for a greater number of people rather than a few selfish people.

“There are genuine Ijaw people fighting for the freedom of the Ijaw people but they’re poor, small and weak. It’s not possible for us to get our freedom alone. We must work with other genuine people who are committed to freedom. So, please stop all these nonsense, stop this disgrace, you cannot achieve Niger Delta Republic. It’s not possible because most of you are only out to gather crumbs. You’re too big for a crumb, you ought to sit at the table and eat like a king,” he admonished.