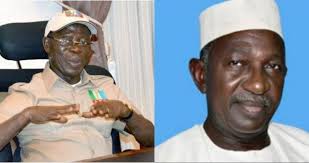 The Deputy Chairman North, of the ruling All Progressive Congress, APC, Senator Lawan Shuaibu has said that he cannot be investigated by the five-man disciplinary committee inaugurated by the party describing the committee as “illegal”

Senator Shuibu made this known in a letter to the committee’s chairman, Otunba Niyi Adebayo and was made available to news men on Saturday.

Acknowledging the letter of invitation, Shuaibu said the committee lacked the constitutional power to investigate him.

Shuaibu said that in Article 21 of the Party’s constitution, such powers can only be exercised through the respective Executive Committee at all levels of the party.

“I was initially gladdened by an earlier statement by the National Publicity Secretary in his media reaction to my letter,that the issues raised in the letter are between two leaders,” he said.

“I wonder at what stage it became a NWC issue, and I don’t know from where the NWC derived the power of discipline.

“I am not a lawyer, but I have been in the political party system for about a decade now to know that every decision of the party shall be in line with what its Constitution stipulates.

“When I served as a National Secretary, my own National Chairman would insist that I worked with the National Legal Adviser for advice on every issue before any decision was arrived at”.

He advised the chairman of the committee to always insist on following due process.

“Otunba my honest advice to you is, since you are the closest NWC member to the Chairman, in order not to drive the party into the mud, always insist on following the due process of law.

“All he needs to do is to work closely with the Legal Adviser and not to mock his advice, because if we find any failure in that instance you cannot blame the lawyer.”

Shuaibu claimed that the allegation against him that he was encouraging members of the National Assembly to vote for a candidate different from the party’s nominee in the senate was just to give him a bad name.

“If you want to punish me for saying what I still believe is true, then you have to take this matter to where you are avoiding, the National Executive Committee (NWC).

“My advice is please let us save this party, as a stitch in time saves nine.

“I assure you there is nothing personal about this, except that my concern that the party is drifting

It will be recalled that the National Working Committee of the APC had on Thursday inaugurated a five-man disciplinary committee to investigate allegations against the party’s chairman, Adams Oshiomhole  by Senator Shuaibu on matters involving the collective decision of the NWC and also investigate an alleged incitement of law makers by senator Shuaibu to choose presiding officers of the ninth assembly, different from the choice of the party.