The ruling All Progressive Congress, APC, has adopted the Senator representing Delta central, Senator Ovie Omo-Agege as its candidate for the position of the Deputy Senate President in the ninth assembly.

The National Working Committee, (NWC) of the party also chooses Hon. Muhammed Idris of Bauchi state as the Deputy Speaker of the House of Representatives.

National Publicity Secretary of the party, Mallam Lanre Issa Onilu made this known in a statement in Monday after an emergency meeting of the NWC held in Saturday 8 and Sunday 9 of June.

He said the agreement was reached after a consultation with President Muhammadu Buhari, APC governors and party stake holders.

He said “The party formally adopts Senator Ovie Omo-Agege for the positions of Deputy Senate President and Hon. Muhammed Idris Wase as Deputy Speaker. This is sequel to wide consultations with President Muhammadu Buhari, party stakeholders, including APC governors.

“You would recall that the party had earlier announced the duo of Senator Ahmed Lawan and Hon. Femi Gbajabiamila as the party’s candidates for the positions of Senate President and Speaker of House Representatives respectively.

“All elected APC members of the Senate and House of Representatives are hereby directed to fully mobilise as a united force behind the party’s choice.

“Members who have earlier signified interests in these positions are urged to support the party’s decisions as loyal and committed members of APC by working with other members to ensure the emergence of the adopted candidates.”

Chairman of the progressives governors and governor of Kebbi state, Atiku Bagudu, who spoke after the meeting said the party have also unanimously agreed to support Senator Ahmed Lawan and Hon. Femi Gbajabiamila for senate president and Speaker of the House or Representatives respectively.

“We equally use the opportunity to deliberate on our support for the leadership of the National Assembly. The governors of the APC have always been unanimous in supporting the party leader, President Muhammadu Buhari and our party in ensuring that we achieve a common purpose,” he said.

“Towards that extent, we are all unanimous in our support for Senator Ahmed Lawan for the Senate presidency and Hon. Femi Gbajabiamila for the Speaker of the House of Representatives and all governors are in agreement and we will work towards that purpose.” 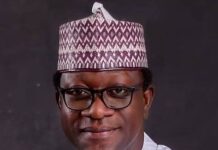