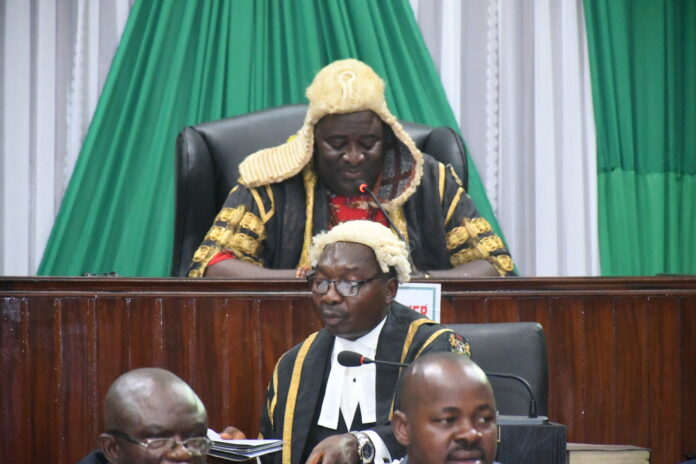 Today, Enugu State House of Assembly held her inaugural sitting in which the speaker, deputy speaker and other leaders of the house were elected.

The clerk of the house after reading the proclamation letter from the governor of Enugu State, Rt. Hon. Ifeanyi Ugwuanyi for the house to seat went ahead to call for nomination for the office of the Speaker and the deputy speaker of the house.

Ikechukwu Ezugwu, the member that will be representing the people of Udenu moved a motion for the nomination of the immediate past speaker of the house and the member representing Enugu East constituency I, Rt. Hon. Ubosi Edward. His motion was seconded by Hon. Iloabuchi Aniagu who will represent Nkanu West in the 7th Assembly of the state.

In the absence of further nomination, Rt. Hon Ubosi went ahead to take oath of office as the speaker of the 7th House of Assembly.

For the position of the deputy speaker of the house, the member representing the good people of Ezeagu in the house, Hon. Barr. Chima Obieze nominated Engr. Uche Ugwu, representing Udi North constituency who is coming to the house for the first time. Hon. Paul Nnajioffor representing Nkanu East seconded the motion.

This will make Enugu State House of Assembly, the most gender sensitive house in the country that has the three female members of the house as principal officers.

Rt. Hon Ubosi directed the clerk of the house to communicate to the executive arm of the government that the house is constituted and ready to accept bills.

The leader of the house, Ikechukwu Ezugwu moved a motion for the adjournment of the sitting house. His motion was seconded by his deputy Hon. Onyinye Ugwu.

The speaker adjourned the sitting of the house to 25th June, 2019