News reached Ohanaeze Ndigbo yesterday of the heartless murder of the daughter of Pa Reuben Fasoranti, Mrs. Funke Olakunrin, on her way from Ekiti to Lagos by supected Fulani Herdsmen.

We offer Chief Fasoranti and the entire Yorubas the heartfelt sympathies of Ndigbo.

The continuous rampaging, plunder, rape, kidnapping and murder of innocent Nigerians by armed Fulani herdsmen has climbed to a most worrisome crescendo. The inability of our Security Forces to disarm and prosecute these criminals gives credibility to a growing story of collusion.

Recently, the British High Commission in an advisory to British citizens in Nigeria declared twenty-four of our states unsafe. In the midst of these killings, their parent organization has the effrontery to give ultimatums to the President of Nigeria to rescind his unpopular suspension, instead of cancelation of his RUGA development policy. Such inciting, provocative and treasonable outbursts have only been greeted by an advice that they should respect the Presidency and an unrelenting resolve to force Nigerians to accommodate such murderers in their homes under a policy that violates our constitution and all laws and court judgments relating to land use administration.

READ ALSO  Buhari's Homestate In Bed With Bandits, Releases 6 Of Them

Ohanaeze Ndigbo warns that this latest murder is capable of throwing our country into uncontrollable break down of law and order.
The hasty conclusion by the Federal Government that she was killed by armed robbers and not the suspected herdsmen who are known to have laid siege on all parts of the country perpetrating acts of banditry and killings further exacerbates the already tense situation.

We call on eminent leaders of this nation inspite of their political persuasions to come together in an urgent National Security Conference to discuss measures that will arrest the extant drift to lawlessness. 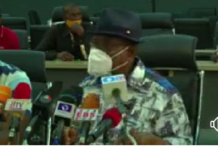