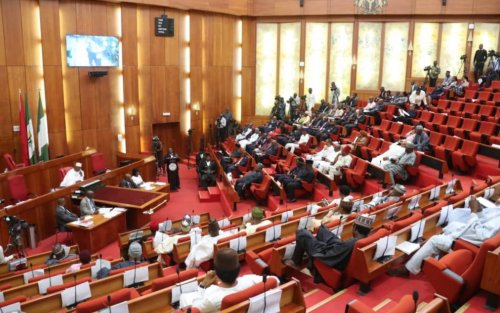 Reports by The Guardian indicates that the leadership of the National Assembly has begun moves to procure “operational vehicles” for federal lawmakers.

The Guardian reports that meetings in that regard started among presiding officers in the Senate even before the apex legislative body embarked on its eight-week recess, which ends on September 24, 2019.

The report noted that the preferred brand being considered for senators is Toyota Land Cruiser Sports Utility Vehicle (SUV).

The Bukola Saraki-led Eighth Senate spent not less than N4 billion at that time to purchase the brand at a cost of N36 million. Two extra cars were also bought.

With the estimated current price of the vehicle now N50 million, the Senate might need about N5.550 billion to get enough quantity for its members, and two additional vehicles.

The chamber has always maintained that the cars are not for the luxury cravings of individual senators but to enhance the operations of committees.

READ ALSO  JUST IN: We Have Taken A Decision On The Election- INEC Chairman

The cars would be meant specifically for all chairmen and
vice-chairmen of Senate committees. But with the Senate now having 69 of such committees, the stage appears set for every member to be appointed as either chairman or vice-chairman.

About N1.3 billion was expended on procuring vehicles for senators in 2012, a development that attracted severe public criticism. At the time, 109 cars were bought for the lawmakers, each costing N11. 07 million.

The Guardian said it could not contact the Senate spokesman, Adedayo Adeyeye, could not be reached for comments as he failed to pick his calls.

The management of the National Assembly was also silent on the alleged abuse of the Procurement and Monetisation Acts following accusations that fairly used vehicles and property were sold at give-away prices to former lawmakers.

Also, the Clerk of the National Assembly, Muhammed Sani Omolori, did not respond to calls for comments.

Some of the items sold to members of the Eighth Senate and House of Representatives at scandalous prices include Toyota Land Cruiser SUVs and office equipment such as computers, photocopiers, and refrigerators.

The management reportedly sold the SUVs, which had been bought for between N24 million and N26 million each, to the departing lawmakers at a paltry N1 million.

It was also said to have received only N360,000 from the lawmakers for a set consisting of two televisions, a photocopier, desktop computers, and a big refrigerator.

All the items handed almost freely to the legislators would apparently be purchased afresh and supplied to members of the Ninth Assembly inaugurated on June 11, 2019.

The newspaper added that the cost of the new computers, scanners,photocopying machines, television sets, and refrigerators would be deducted from the severance package of the retiring legislators.