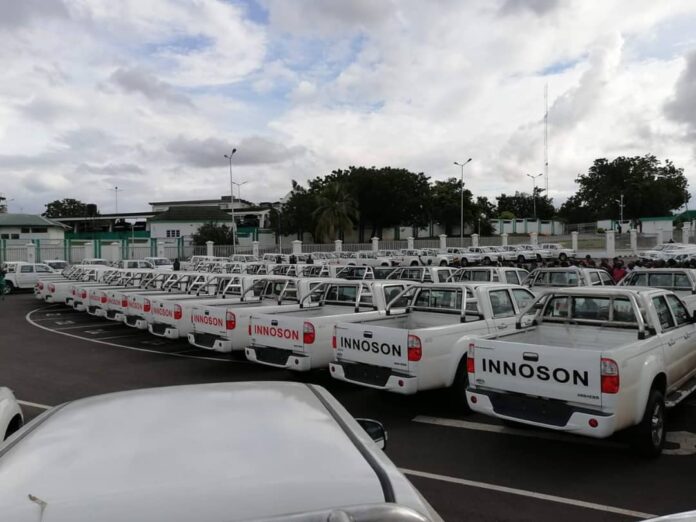 On the 11th of September, over 300 vehicles was provided by Enugu state government for security operatives – the first of its kind in Enugu state.

Journalist101 sought the reaction of Enugu residents to the development and how it affects them directly.

Our first point of call was Amankwo Ugbawka, Nkanu East LGA. The women in the area said if this will make them go to their farms in peace, they will be very grateful.

One of the youth leaders in the community said; “this is the first time a government is sincerely coming to tackle the security challenges of our community.” “We have been living in make-believe peace here. Our people are rice farmers but go around, most of the rice farms are deserted.”

“My brother do you want me to tell you the truth? The truth is that there have never been security in this community for more than 8 years now, this is the first time we are seeing a governor want to tackle our problem and we are very happy with that.

“As I speak to you now, our people are being engaged to tackle this situation and we have never had it this good before. We pray the entire process is not contaminated so that our people can go to farm without fear of their crops being destroyed,” he said.

At Amaokpo, Enugu East LGA, some of the indigenes and residents that spoke to our correspondents said this is a “breathe of fresh air,” as they are now hoping for an improved security in their area.
One of the residents, who simply identified himself as Mr. Nweke said “by the action of the governor, there’s a hope on the horizon because I think this is a sincere effort.
“We have been worried by the rising security concerns in the state but I think the Governor is making frantic to contain the situation. This is commendable” he concluded.

At Garriki, Awkunanaw area of the state, it was a mixed reaction as some of the residents, like Oliver Twist, wants more to be done. While some of them wants the “Forest Guards” to come alive as soon as possible. Some of them are skeptical hoping they won’t become a nightmare for the locals but took solace to the fact that the Governor didn’t politicize the recruitment process.
Mr. Sunday Ogbonna while speaking to our correspondent said; “the news is a cheering one.” “When the Governor came up with the issue of Forest Guards, I was amongst those that said this won’t work because of the character of our political leaders.

READ ALSO  9Mobile taken over by another company

“I must tell you, I was shocked when I saw the number of vehicles purchased for this cause. The governor has shown great commitment to securing the state and I owe him an apology for doubting his political will to bring the Forest Guard to fruition in the first place.”

At the popular Ogbete Main Market, Holy Ghost, Enugu, most of the reactions we got about the purchase of the vehicles were talking about the economic relevance of the action of Governor. At one of the popular motor parks, the drivers that spoke to us hailed the governor for patronizing indigenous Innoson motors. He said; “When I saw those Hilux van, my joy knew no bounds.
‘I was so happy the Governor patronized one of our own, yes I’m from Anambra state but my happiness isn’t because the owner of Innoson is from Anambra state but the mare fact that this company is domiciled in AlaIgbo. I am so happy” the driver that gave his name simply as okechukwu said.

A store owner in the market, Mr. Sunny Nnamene said he is elated that the youths of the state will be engaged and salaries paid. “This is part of the empowerment we are looking for.”