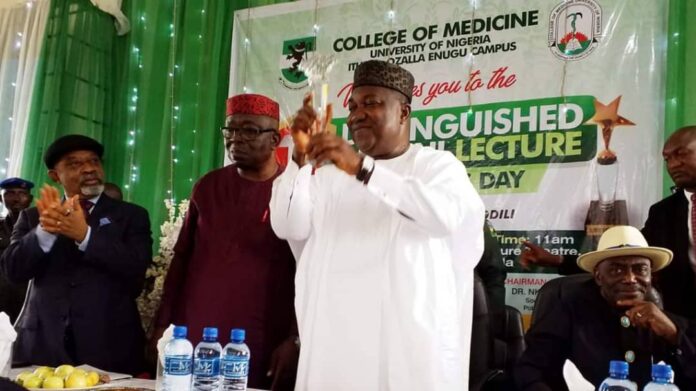 ENUGU— Governor Ifeanyi Ugwuanyi of Enugu State was last Thursday, honoured with the award of good governance in the health sector by the College of Medicine, University of Nigeria Nsukka, Ituku-Ozalla, Enugu campus.

Speaking at the event, the Provost of the College, Prof. Uchenna Nwagha, disclosed that the award was conferred on Gov. Ugwuanyi for “providing the enabling peaceful environment and good policies on Health and Medical Education”.

Prof. Nwagha added that “the ongoing rehabilitation of the old UNTH road” by Gov. Ugwuanyi’s administration “as well as assistance in the establishment of the research and diagnostic centre” also informed the college’s decision to honour the governor.

The Provost who stated that the award day and lecture, which was delivered by Dr. Odili, were designed to be a serial event to show appreciation and recognize the alumni and others that have put in their best for the college and laid a foundation for the progress of the institution, used the opportunity to highlight the college’s accomplishments so far.

Addressing the audience, Governor Ugwuanyi who appreciated the honour and award bestowed on him, stated that it was a great privilege for him to be in the midst of very distinguished and accomplished alumni of the prestigious University of Nigeria and friends of its College of Medicine.

The governor who reiterated his administration’s commitment to delivery of qualitative and affordable healthcare services at all levels to all residents of the state, disclosed that his government in keeping with this vision has “7 General Hospitals, 43 Cottage Hospitals and about 390 public Primary Healthcare facilities in the business of healthcare delivery”.

Ugwuanyi added that 125 interns and 102 Resident Doctors are being engaged and recruited at ESUT Teaching Hospital, Parklane, Enugu for more effective and efficient services.

“Enugu State Government recently fulfilled the requirements for takeoff of the Basic Healthcare Provision Fund including the payment of the mandatory N100m counterpart fund to enable all residents of the state access care under the Universal Health Coverage.

Wife of Dr. Odili and Justice of the Supreme Court of Nigeria, Hon. Justice Mary Odili was also present at the event.