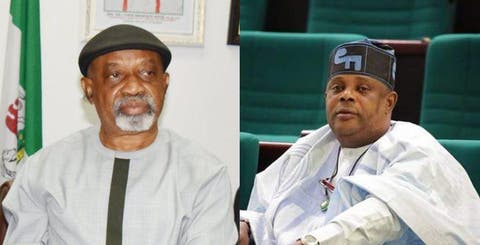 The full video of the altercation between the minister of Labour, Dr. Chris Ngige and the lawmaker, John Faleke that made the former address the later as a “small boy” has emerged.

In the video, Faleke who left the subject matter of the day asked Ngige what informed his appointment as a minister by President Buhari.

“You are a former governor by the grace of God, you are also a former Senator.

“I also want to ask, you served as a Minister in the first tenure, now you are in the second. Hon. Minister, will you say that your appointment by Mr. President was based on you being a member of the party or because of your personality or because of your performance for the president at the election. I look look at the result in your local government, you scored 2002 votes for the President while the PDP scored 72,000?”

“I am at least seven years older than you. I’m sure, he said.

“I am the same age as your mentor in Lagos, Asiwaju (Bola Ahmed Tinubu). And I was Governor with him at the same time. He was a Senator, I was a Senator, Ngige continued.

“But you won these elections very well?”

But Ngige fired back:

“No problem about that. Just like you won your own in Kogi State very well and you are now both the Governor and Deputy Governor.

“You are just a small boy in Lagos. Look at this Mushin boy, talking to a Victoria Island boy.”

Once I see reactions online to an issue, I'll love to SEE d ACTION that somebody was REACTING to that led to online reactions.
What exactly was the meaning of that question by Faleke that Ngige was responding to?
Shebi it's the same Ngige that was pleading on behalf of Keyamo?🙄 pic.twitter.com/oZfNRQt34U