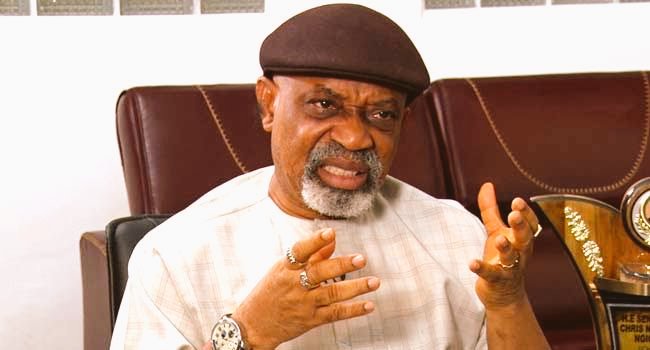 The Minister of Labour and Employment, Chris Ngige, and the Trade Union Congress disagreed on Wednesday over the plan by the TUC to go on strike as from September 23.

The minister while answering questions from State House correspondents at the end of the weekly meeting of the Federal Executive Council at the Presidential Villa, Abuja, dismissed the seven-day ultimatum the TUC gave the Federal Government to reverse the price of petrol.

According to him, the letter written by the TUC should have been addressed to him, instead of the President, Major General Muhammadu Buhari (retd.).

But the TUC President, President, Quadri Olaleye, said the issue of petrol price was beyond the minister, adding that Ngige should wait till September 23 to see what would happen.

Also on Wednesday, the Nigeria Labour Congress issued a two-week ultimatum to the Federal Government to reverse its decision on the hikes in electricity tariff and the fuel pump price or face civil unrest nationwide.

The congress handed down the warning at its Central Working Committee meeting in Abuja on Wednesday.

In a communiqué read by the NLC President, Ayuba Wabba, the union said the ultimatum would take immediate effect, warning that it would mobilise its members nationwide for protests as from September 28.

In an interview, the NLC President said the national executive committee members and the state chapters as well as affiliates would meet on September 22 to decide on the strike action if the government failed to revert to the old prices by then.

“Today’s (Wednesday) decision on the ultimatum was taken by the Central Working Committee of the NLC. But by the expiration of the ultimatum, if the government fails to reverse the increase in electricity tariffs and fuel pump price, we would hold a meeting on September 28 and take a decision on a strike action,” he disclosed.

Government had two weeks ago increased the ex-depot price of petrol from N 138.62 to N147.67, prompting marketers to adjust their petrol prices to between N158 and N162 from N148 to N150 in August. The ex-depot price is the price at which government sells petrol to marketers.

Besides the fuel hike being the third within three months, it came at a time electricity distribution companies increased their tariffs.

The TUC gave its seven-day ultimatum in a letter addressed to the President and dated September 4, 2020.

The letter titled, “We cannot bear the burden any longer, issuance of seven days ultimatum,” was signed by Olaleye; and the Secretary-General, Musa Lawal.

But Ngige, in the interview with the State House correspondents said the TUC’s letter was misplaced because it was addressed to the President, whom he claimed, is not recognised by the International Labour Organisation.

He gave an indication that the letter should have been addressed to him, and not Buhari.

The minister said, “On the TUC issue, the seven-day ultimatum was misplaced because they wrote the President and issued an ultimatum to him. The President is not recognised by the ILO.

“The competent authority for this nature of the dispute in Nigeria resides in the man who oversees them, which is whoever is the Minister of Labour and Employment.”

Wait till you see our action, TUC replies Ngige

But Olaleye said the decision to embark on a strike and nationwide protests was taken by the National Executive Committee and the National Action Committee of the union.

He dismissed Ngige’s objection, noting that the issues in contention had nothing to do with workers’ wages over which he could preside.

The TUC president said, “We have fully mobilised already. It was an organ decision: the NEC, the NAC took the decision, so, the preparation is ongoing.

“For your information, the NLC has also given the Federal Government a two-week ultimatum. Let the minister continue to quote the law. On the expiration of the seven days, he would see the action; he can tell us if it is null and void or not.”

Responding to the minister’s argument that the letter should have been addressed to him, Olaleye stated that the minister did not take decisions affecting the country.

He noted, “We are talking to our President. The minister is not the one making decisions and this is not a labour matter. We are talking about issues that affect the general population of the country and we are very much aware of the ILO Convention.

READ ALSO  Gov. Wike shows he's not happy with the outcome of the PDP prmaries

“This one is beyond labour matters. We are not talking about salary increase here. We are talking of something that affects members of the union and the general populace.”

On the nature of the protest, the union said this would be communicated to Nigerians soon, adding that Nigerians would be mobilised through the 79 civil society groups that had signed up for participation in the protest.