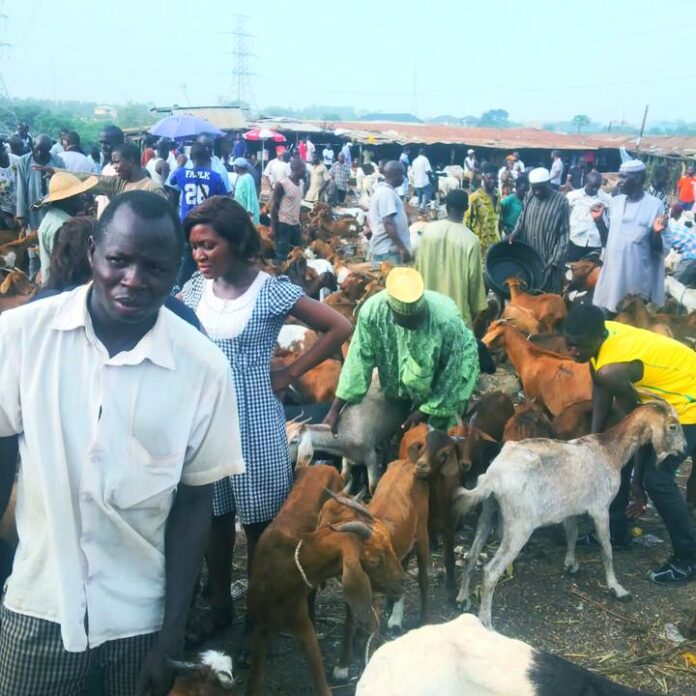 Traders at the disputed new Artisan Goat Market Enugu, have said they are yet to recieve any Court judgement ordering them to vacate the market, insisting that the place was duly allocated to them by the Enugu state government

It would be recalled that the said market was gazetted as new Artisan Goat market in 2006, by then administration of former governor of Enugu state, Dr. Chimaroke Nnamani, after which it was allocated to the traders.

It was gathered that an individual, one Mr. Emeka Nnaji, who is laying claim to the land in collaboration with some State Judicial officers and the police, is relying on a court verdict he secured in 2007, in making the move of sending the traders packing from the said popular New Artisan Goat market.

Nnaji’s move is propelled by a writ of execution in respect to a Suit No E/539/2005, which granted part of the land which constitutes the goat market to his late father, Chief Everest Nnaji.

Speaking with newsmen Wednesday in Enugu, lawyer to the traders, Barrister Olu Omotayo, who is pursuing the matter from the Human Rights perspective, maintained that the traders are yet to be served any document regarding to the court judgment.

He said the traders are relying on the fact that the goat market was duly allocated to them by the state government, and that they have all their relevant documents to that effect.

Omotayo, who is president of a Human Rights organization, Civil Rights Realization and Advancement Network (CRRAN), hinted that the Traders, had gone to Court of Appealed over the matter.

Our Correspondent who went to the market to monitor the situation, saw Nnaji and some armed policemen as well as other individuals accompanying him, moving round the market.

When asked the reason for their moving round the market, he said, “am here to execute a court judgment which has made it clear that this land in which this goat market is located belongs to my father. So, i have come to carry out a survey of the place.”

Meanwhile, efforts by Journalists to obtain the Court verdict document from him hits the rock, as he said, “my brother, as Journalists, if you need the judgment you know where to go and get it. Go to the Court and apply.”

Chairman of the market, Alhaji Danlandi, Abubakar, said the ejection threat if allowed, would throw them and family members numbering over 10, 000 into unbearable hardship.

The Human Rights group, had recently written to governor Ugwuanyi, on the matter asking him to intervene so as to save the traders from untold difficulties

According to CRRAN, the state Judicial officials had informed the Goat Traders “that they want to execute a Writ of Execution in respect of Suit
No.E/539/2005, which granted part of the land which constitute the Goat Market to a private person.

“But we find this development very strange and curious because we know that all the parcel of land which constitutes the Goat Market belongs to Enugu State Government by virtue of ‘Enugu State of Nigeria Official Gazette No.1, Vol 15, of 6th April 2006’, which gave Notice of Public lands Acquisition (Acquisition Notice) and designated the place as Goat Market.

“We submit that if Suit No.E/539/2005, was instituted and determined before the earlier mentioned Official Gazette came into force, the
judgment has been affected by the official takeover of the parcel of land in question and any citizen who has any interest in any land
therein shall only be entitled to prompt payment of compensation as provided by law.

Omotayo added: “We submit that the Attorney General of the State is a necessary party in respect of any action instituted in respect of government land which we doubt whether he is aware of the said Suit No. E/539/2005.

He argued that the traders of the goat Market are peaceful and law abiding citizens “and we urge you to urgently intervene in this matter because the action of the proponents of the so call writ of execution may cause a breach of peace law and order.

“It should be noted that there is a pending appeal at the Court of Appeal, Enugu on the matters bordering on the rights of the traders of
the Goat Market in the Case: ALHAJI ADAMU MAIWA & 2 OTHERS V. ATT
GENERAL OF ENUGU STATE & 2 OTHERS Appeal No. CA/E/526/2017.”