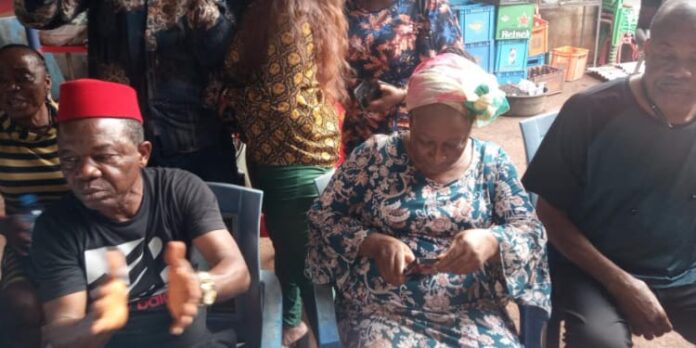 Chinwetalu Agu has reunited with his family and friends in Enugu after his ordeal with the Nigerian Army and Department of State Security (DSS).

The veteran actor was welcomed in a grand-style by the Actors Guild of Nigeria, Enugu State Chapter led by its Chairman, Brown Ene on Thursday.

Journalist101 had reported that the actor was arrested at Upper Iweka, Onitsha Anambra State on the 7th of October, 2021 for wearing a Biafra regalia. He was subsequently released by the army but was picked up by the DSS.

The Army accused the actor of inciting the public and supporting the Indigenous People of Biafra, IPOB. He was released by the DSS on the 12th of October.

During the welcome parley, Agu narrated part of his ordeal in detention and disclosed that senior security officers ceased the opportunity to familiarize with him, Thesun reports.

“That drama that took place was important so that they will know that Igbo are here. That moment of Upper Iweka till the time we got to the army barracks close to Zik Mausoleum, to 82 Division of the Nigerian Army and to DSS office in Abuja, nobody touched me. They treated me with respect.

“Every officer wanted to be involved in the case so that they can have opportunity to interact with Chinwetalu Agu. My advice is that herders should stop vandalising farms in Igbo land. That is where we get our food. While we were coming back to East by road, we saw vast land that are wasting away in the North but they left that place to come and destroy our farms here.”

The Enugu Chairman of the Guild, Mr. Brown Ene, who organized the reception said that he was grateful to God for Agu’s safe return to Enugu.

Ene insisted that Agu had not committed any offence which would warrant his arrest, but advised entertainers to be careful with their actions because they can be easily misunderstood.